Cysteine proteases are expressed ubiquitously in the animal and plant kingdom and are thought to play key roles in maintaining homeostasis. The aberrant function of cysteine proteases in humans are known to lead to a variety of epidermal disease states such as inflammatory skin disease1. In marked contrast, the serine proteases have been most widely implicated in disease states, including hypertension, periodontisis, AIDS, thrombosis, respiratory disease, pancreatitis and cancer2, and a number of their inhibitors have been approved for clinical use.

As protease enzymes have an inherent propensity to degrade their respective substrates, they are often synthesised in an inactive form (pro-enzyme) in order to prevent aberrant activity. This pro-enzyme subsequently undergoes auto-catalytic processing to release the pro-domain, which thereby results in the generation of mature catalytically competent protease17. The peptide sequences surrounding the auto-catalytic cleavage sites of proteases are often used to design protease substrates such that they contain similar sequences18,19. However, proteases usually undergo a conformational change upon autocatalytic processing and the specificity characteristics of the mature protease may not directly resemble that of the pro-enzyme, therefore it is not always the case that a substrate designed on the basis of the auto-catalytic cleavage site will be acted upon by the mature protease.

The mechanisms by which low molecular mass inhibitors act upon cysteine proteases include (a) reaction with their catalytic site thiol group resulting in the formation a product which cannot undergo any further reaction, (b) forming a reactive intermediate that subsequently reacts with the enzyme via a mechanism that is not part of its usual catalytic act or (c) reacting with the enzyme active centre via their usual mechanism and undergoing further reaction at such a slow rate that it is essentially considered to be an irreversible reaction thereby rendering the enzyme catalytically inactive. An extensively characterised low molecular mass cysteine protease inhibitor is the natural product alkylating agent L-trans-Epoxysuccinyl-leucylamido(4-guanidino)butane (E-64) that originates from Aspergillus japonicas. This has been shown to inhibit a variety of plant cysteine proteases (including papain and ficin), human cysteine proteases (cathepsin L20, a protease from human breast-tumour tissue21, and the calcium-dependent protease calpain from chicken muscle22, but not to inhibit a variety of serine proteases (trypsin, chymotrypsin, tissue kallikrein, plasmin and pancreatic elastase) or aspartic proteases (pepsin and Paecilomyces acid proteases). X-ray crystallography studies of papain-E64 complex have shown that the epoxide residue of E64 interacts with the papain S1-subsite and the leucyl residue is bound to the papain S2-subsite. A variety of E64 derivatives have been synthesised and tested in vitro against cysteine proteases, of which CA-074 has been shown to inhibit cathepsin B with an IC50 in the low nM range with >1,000 fold selectivity against other related cysteine proteases cathepsin L and cathepsin H23,24. Collectively, these studies suggest that E-64 has been a valuable inhibitor for the study of cysteine proteases.

The cystatins are members of a superfamily of evolutionarily-related proteins (each containing >100 amino acid residues) that can be divided into three major families, namely Type-1 cystatins A and B (also known as stefins) which are relatively simple in structure, containing no disulfide bonds or carbohydrate and are found intracellular as well as the cytoplasm of cells as well as body fluids. Type-2 cystatins (C, D, F, G, M/E, S, SN, and SA) containing two disulfide bonds and no carbohydrate which are mainly extracellular secreted polypeptides synthesised with a significantly shorter (19 to 28) residue signal peptide and are broadly distributed and found in most body fluids, and Type-3, also known as kininogens (L- and H-kininogens) which are composed of many domains, disulfide bonds and carbohydrate and these include H-kininogen (high-molecular-mass, IPR002395) and L-kininogen (low-molecular-mass) and are found in a number of species27. The first human cystatin was identified from the sera of autoimmune disease patients and was shown to inhibit the cysteine proteases papain, human cathepsin H and cathespin B28.

In general, cystatins are competitive, reversible, tight binding proteins that inhibit cysteine proteases in a micromolar to picomolar range29. They are capable of rendering their target proteases inactive via a stable complex and preventing any additional proteolysis30-33. These inhibitors act upon their target proteases that have escaped or upon exogenous proteases of invading microorganisms. The absence of these endogenous inhibitors has been implicated in disease states, for example, cystatin C has been shown to promote atherosclerosis in apolipoprotein E deficient mice34. Each cystatin has a single reactive site and binds to their target cysteine protease in a non-covalent manner. Although the cystatins have many common features, the differences in their structures have a considerable effect upon their abilities to inhibit their target proteases. The chicken egg white cystatin has been purified and extensively characterised with regards to its bio-physical characterisation and kinetics and mechanism of inhibition of a variety of proteases35 and has been shown to be composed of two major forms (Form A and Form B, composed of 108 and 116 amino acid residues respectively and containing two disulfide bonds).

The studies of Grzonka et al40 involved the characterisation of the potential of various cystatins to inhibit papain and cathepsins B, H, L and S and identified the key residues that are responsible for the inhibition profiles against a range of plant cysteine proteases (papain, ficin, actinidin and cathepsin B).

Studies have shown that cystatin A, cystatin B and cystatin C inhibit the cysteine proteases cathepsin B, cathepsin H and cathepsin L with Ki in the double digit nanomolar range. Many of these enzymes have been implicated in tissue degradation and excessive proteolytic activity, leading to diseases such as arthritis, stroke, Alzheimer’s and cataracts. The structural basis for the inhibition of the cysteine protease papain by chicken white cystatin has been determined  and shown to interact with the S1-S3 subsite of papain and hairpin loops interacting with the S1‘-S2‘ subsite.

Considerable progress has been made in relation to the understanding of the roles cysteine proteases play in diseases. The existence of a variety of endogenous protease inhibitors, notably the cystatins, have been relatively under-exploited for the discovery of inhibitors of proteases despite the extensive kinetic characterisation of their mechanism of inhibition of their respective protease target. As a variety of natural cysteine protease inhibitors have been identified with a range of potencies, some which are relatively potent and elucidation of their mechanisms of action, identification of key binding interactions and kinetics of inhibition can be used to facilitate drug discovery. A comprehensive list of small molecule cysteine protease inhibitors can be found in the review of Otto and Schirmeiter41. Recent examples of proteases against which inhibitors have been developed, shown to be efficacious in clinical trials and approved by the Food and Drug Administration (FDA), include Sitagliptin which inhibits the serine protease Dipeptidyl Peptidase 442. Although the results from these extensive studies can be exploited in order to identify key interactions for drug discovery purposes, it has remained a considerable challenge to develop suitable compounds with appropriate potency and selectivity. 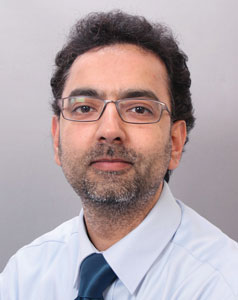 Sheraz Gul ([email protected]) is Head of Biology at European ScreeningPort, Hamburg, Germany where he manages the assay development and screening of academic targets. Prior to this, he worked for GlaxoSmithKline for seven years where he developed biochemical and cellular assays for High Throughput Screening as well as hit characterisation. In addition, he has worked in academia for five years on proteases and kinases. He is the co-authored of the Enzyme Assays: Essential Data Handbook. He is involved in many European Initiatives involving government, the pharmaceutical industry and academia (e.g. EU Framework 7 and IMI). His research interests are directed towards maximising the impact of HTS for drug discovery.