International standards: a tool for compliance

Regulatory guidance documents, such as Annex 1 to the GMP guideline of the European Union1 and FDA’s comparable Guidance for Industry2 establish the objectives to be met by pharmaceutical contamination control systems – especially those for the production of sterile medicinal drugs.

Regulatory guidance documents, such as Annex 1 to the GMP guideline of the European Union1 and FDA's comparable Guidance for Industry2 establish the objectives to be met by pharmaceutical contamination control systems – especially those for the production of sterile medicinal drugs.

Regulatory guidance documents, such as Annex 1 to the GMP guideline of the European Union1 and FDA’s comparable Guidance for Industry2 establish the objectives to be met by pharmaceutical contamination control systems – especially those for the production of sterile medicinal drugs.

For the details to be observed for ensuring performance and quality during design, construction, start-up, qualification and operation of pharmaceutical cleanroom systems, these guidance documents rely upon – and make explicit reference to – technical standards. Here, the international standards developed under the auspices of ISO – the International Organization for Standardization – merit particular consideration.

Supported by CEN – the European Committee for Standardization – ISO has embarked, in 1993, upon the development of two families of contamination control standards:

EN ISO standards are developed in a sequence of steps. Point of departure is a New Work Item Proposal NWIP, which requires active support from a specified number of nations committing themselves to participate in the elaboration of the forthcoming standard. The approval procedure is subdivided into three stages in sequence:

Thereafter, all CEN nations are required to incorporate them – within six months – into their national collections of standards. Thus, publication in 28 national standards collections is guaranteed right from the beginning – strong motivation indeed for worldwide adoption and acceptance. In parallel, CEN members are required to withdraw any national standards on the same subject matter.

Five years after publication in the ISO and CEN collection of standards, each standard is automatically submitted to Systematic Review and subsequently corrected or amended if this is deemed necessary.

A compilation of the standards already issued and under development is presented in Figure 1; the column status 06-05 identifies their actual state of development. In addition to these work items, the elaboration of an international standard devoted to the important issue of surface cleanliness has recently been initiated. First circulation as Committee Draft is imminent.

As soon as they have reached DIS status, international standards should be given priority over national standards and guidelines and recommended practices elaborated by professional societies. With ten international cleanroom standards now in the DIS stage and beyond, ample guidance is now available for most contamination control topics of interest to the pharmaceutical industry.

For more than 30 years, U.S. Federal Standard 2095 had been the leading standard worldwide for classifying cleanrooms. The latest edition, 209E, published in 1992, was officially withdrawn in 2001 and replaced by the corresponding ISO standard.

The air cleanliness classification scheme according to EN ISO 14644-1 is based upon a formula and shown in Figure 2 in tabular form. The range of particle diameters for air cleanliness classification extends from 0.1 to 5μm. Thus, it is focussed upon the detection capabilities of the discrete-particle counter, the reference test method for demonstrating compliance with EN ISO 14644-1. Tests shall be conducted with calibrated instruments and class limits must be met with the rigours of the 95 per cent upper confidence limit.

The remaining parts of the series

The following information focuses upon the standards of direct relevance for the pharmaceutical industry (see lit. 6 for more details).

In the case of pharmaceutical production facilities, the optional leak test of the installed terminal HEPA filters protecting the grade A areas is also strongly recommended. Extraordinary requalification should be performed after significant changes to the installation and after major maintenance operations (e.g. replacement of the terminal HEPA filters).

EN ISO 14644-3 – presently at the FDIS stage – provides guidance for tests and measurements of the physical parameters relevant in the cleanroom context. A total of 14 measuring tasks are addressed. In addition, the minimum performance requirements for the test instrumentation are specified in detail.

ISO 14644-4 offers comprehensive and systematic guidance for design, construction and start-up of cleanrooms; it may well be perceived as the basic compendium of cleanroom design and realisation. One of the recommendations to be highlighted is the shell concept as a zoning principle for clean facilities (Figure 3). It illustrates transparently how contamination transport towards the critical areas can be dominated effectively by gradually increasing the contamination control requirements from zone to zone. Limiting the core area with the highest air cleanliness requirements to the absolute minimum also addresses the economic issue of cost minimisation in investment and operation. ISO 14644-4 provides for the first time concise guidance for the qualification checks and tests to be performed during the subsequent realisation stages of a clean facility. Worth mentioning, moreover, is a systematic compilation of all the determinations having to be agreed between purchaser/user and designer/supplier during project development. It is condensed into a comprehensive checklist covering 12 subject areas with a grand total of 151 items! If project design is cross-checked with its help, it is almost impossible to have overlooked something of importance.

EN ISO 14644-5 addresses the operational aspects of cleanrooms with a focus on the principal hazards: cleanroom clothing, personnel, stationary equipment, materials as well as portable and mobile equipment and cleanroom cleaning.

Surface cleanliness is the only pharmaceutically important subject area not yet addressed in the EN ISO 14644 series. For this topic, however, an excellent alternative compendium can be recommended: the guideline VDI 2083 Part 47 elaborated by VDI (Verein Deutscher Ingenieure = Association of German Engineers). Published bilingually (left columns German, right columns English), this compendium covers its topic most comprehensively, specifically taking pharmaceutical aspects into consideration. It is one of the basic documents instrumental for development of the forthcoming EN ISO 14644-9 standard on surface cleanliness.

Both FDA and the European Community establish room grades for aseptic processing (FDA2) or for the production of sterile medicinal products in general (the European approach1). How well do these pharmaceutical room grades correlate with the air cleanliness classes as defined in EN ISO 14644-1?

Annex 1 to the European GMP guideline establishes particle concentration limits for two occupancy states: at rest and operational (Figure 5). For particles 0.5mm and above, the class limits comply with EN ISO 14644-1. This is, however, not at all true for particles 5mm and above! For room grades C and D, the differences in the limits are reasonably minor. For room grade A and B in the at rest occupancy state, however, the differences are substantial. Corresponding with ISO Class 3 (sic!), they are extremely strict: two classes stricter than those applying for particles 0.5mm where ‘only’ ISO class 5 is to be met. European industry is extremely unhappy about these 5mm determinations and most disappointed that their regulators continue to ignore the ISO air cleanliness determinations8-11.

Comparing the attitudes behind the new regulatory documents for sterile manufacturing, different philosophies seem to be followed on both shores of the Atlantic. The openness to dialogue with industry so apparent in recent FDA policy and in the new-generation FDA guidance documents is not yet reflected by the European regulators. Even worse: the European and American GMP requirements for aseptic processing and the manufacture of sterile medicinal products seem to drift more and more apart. If both authorities have to be satisfied – and this is nowadays the normal situation – extra effort and, as a consequence, extra cost is incurred.

The argument is frequently heard that both GMP guidelines are 99 per cent harmonised. However, in the remaining 1 per cent of discrepancies there are most relevant ones to be found, such as the European determinations for particles > 5μm!

The international cleanroom standards have prepared the path: within a reasonably short period in time, generally accepted standard families have been elaborated. Moreover, international co-operation has set quality benchmarks: ISO 14644-1 on air cleanliness classification, for example, is generally perceived as a step forward compared to its predecessors, especially U.S. Federal Standard 209E.

Therefore, there is no reason for international harmonisation of the world’s GMP compendia to remain wishful thinking. An international GMP guideline is a realistic goal – a goal worth striving for! 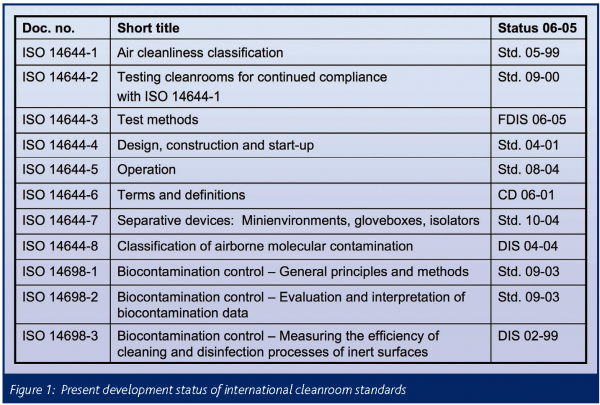 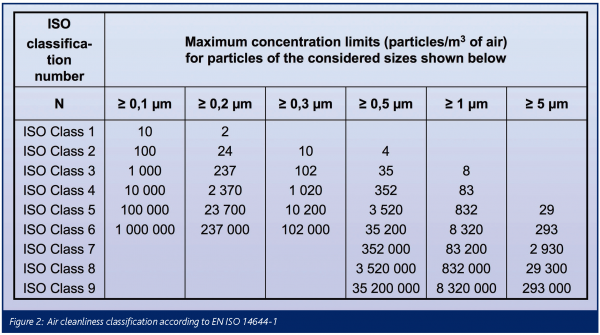 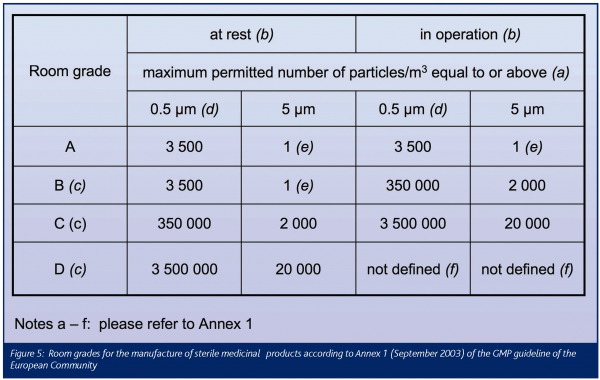 One response to “International standards: a tool for compliance”