Free membership: sign up today to access all of our exclusive content
Webinar 29 September 15.00 BST by Thermo Fisher Scientific – Delivering value: how LIMS can enable data integrity in pharma manufacturing
Application Notes & Whitepapers Supplement: read the latest applications and advice from industry experts
Join our live webinar with Charles River on 15 October at 15.00 BST to learn more on the analytical reality of recombinant endotoxin technologies
Our latest issue is now available to download: articles include the promise of virally vectored DNA and mRNA vaccines to combat COVID-19
article

At least some degree of solubility in water is necessary for active ingredients in pharmaceutical products to be effective in vivo. However, as efforts to discover and synthesise new active ingredients are pursued by industrial and academic medicinal chemists, achieving sufficient aqueous solubility can often be a significant limitation to clinical and commercial success… 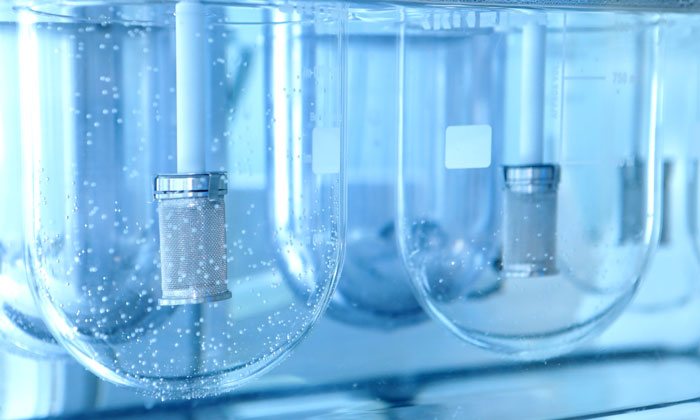 Given the frequency and significance of this problem over the recent past, multiple solutions are being researched and applied in academia and industry.1 This review article provides a high-level description of the poor solubility problem and suggests a few techniques to deal with it.

The pharmaceutical discovery process can vary significantly depending on the characteristics of the intended target and therapeutic indication, availability of compounds with suitable properties to hit the target, and robustness of in vitro assays, among other differences. Irrespective of these differences, at some point in the discovery process the newly synthesised compounds will be dosed to animals to determine their pharmacological and toxicological activity in vivo. This is the point at which their aqueous solubility often becomes important. Occasionally, this realisation will occur during in vitro studies, but poor aqueous solubility is usually masked by the nature of these assays.2

Aqueous solubility is an obvious requirement if the chosen route of administration is intravenous or subcutaneous injection; aqueous vehicles are highly preferred (eg, as opposed to using solvents and surfactants) to minimise off-target effects due to the dosing vehicle. Additionally, it should be recognised that a solubilised formulation may precipitate in vivo and particles may be harmful because they can occlude capillary vessels. When the intended dose to the target animal cannot be solubilised in a typical aqueous vehicle, such as 5% dextrose or physiological saline, effort must be made to either apply a solubilising formulation to the existing compounds or direct the synthetic programme towards compounds with higher aqueous solubility.

It may be less obvious that compounds administered orally also need adequate aqueous solubility. For an oral medication, the solubility requirement stems from the fact that absorption typically occurs in the small intestine and only solubilised compounds can be absorbed. A simplified depiction of the oral absorption process is shown in Figure 1. The diagram also highlights the need for permeability through intestinal tissue. Since intestinal mucosa is principally hydrophobic, this characteristic usually means that hydrophobic compounds have better permeability than hydrophilic ones. Furthermore, successful oral absorption requires a balance of permeability and solubility. In recognition of these requirements, Pfizer researchers pioneered the ‘Rule of five’ concept in the late 1990s to direct medicinal chemists’ synthetic efforts.3 In a further elaboration of their approach, the concept of ‘Minimal acceptable solubility’ was developed, in which the importance of biological potency is incorporated,4,5 as illustrated in Figure 2.

While it should be noted that these predicted solubilities may not be accurate, what is important is the concept and trade-offs when considering solubility, permeability and potency for a series of discovery compounds to be administered orally…

These concepts have become more sophisticated over the past decade and researchers6,7 have incorporated them into the ‘Maximum absorbable dose’ metric to be used by pharmaceutical scientists8 as an important predictive tool during pharmaceutical discovery. 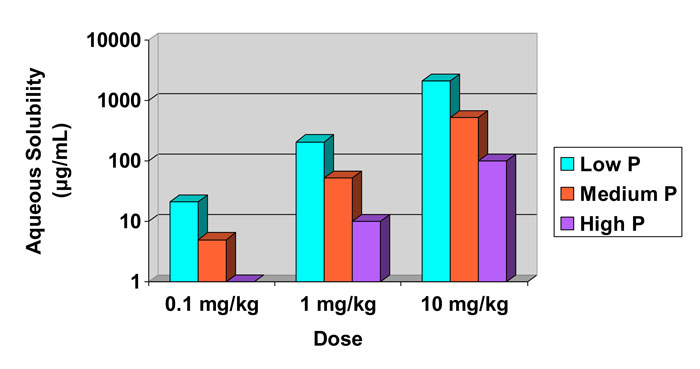 When confronted with poor aqueous solubility for a parenteral product, it is relatively straightforward to improve solubility by altering the chemical environment of the compound. For instance, the use of buffers and counterions, along with pH adjustment, can be successful. This approach can be enhanced by incorporating pharmaceutically acceptable co-solvents (eg, ethanol, glycerol, polyethylene glycol, or propylene glycol), surfactants (eg, one of the polysorbates, a poloxamer or Cremophor) or cyclodextrins.9,10 The caveat to these solubilisation approaches, as has been noted previously, is that API precipitation in vivo often leads to irritation or even more severe reactions upon administration. A published review describes which solubilising excipients have been incorporated into commercial parenteral products up to 2004.11 A poorly soluble crystalline compound intended for administration by injection will often become sufficiently soluble if it is lyophilised to create an amorphous solid.12 Stabilising the amorphous form can be difficult, however, so this is not necessarily a panacea for poorly soluble compounds.13 Optimisation of the manufacturing process and the formulation (by incorporating stabilising excipients) is usually required to achieve sufficient physical and chemical stability for commercial products.

Improving the aqueous solubility of orally administered compounds can often be accomplished by changing the solid form through various engineering technologies. For example, if the compound has an ionisable group then salt formation can often be explored. For compounds with or without ionisable groups, there has been the recent success in forming more soluble solid forms by creating a co-crystal.14,15 Both salt forms and co-crystals can be further optimised by conducting polymorph screening studies and selecting the most soluble polymorph.

Because non-crystalline solids are generally more soluble than crystalline materials, oral formulations have been developed to take advantage of improved aqueous solubility of amorphous pharmaceuticals.12 The challenge with amorphous solids, however, is that crystallisation is preferred thermodynamically. Stabilised amorphous forms will be discussed in the next section, as excipients are required to achieve adequate physical stability.

Although the conventional solubilising approaches illustrated thus far can improve aqueous solubility,11 many compounds remain challenging. Considerable effort has recently been devoted to identifying improved excipients and manufacturing processes for poorly water-soluble compounds. The two most commonly used categories will be discussed here as they are most commonly employed: lipid-based and amorphous-form stabilisers.

The use of lipids to deliver hydrophobic compounds through the intestinal lumen takes advantage of the ability of lipids to solubilise these compounds and that there are natural pathways to facilitate absorption of lipidic substances.17 Due to the myriad of lipid excipient choices, developing these formulations requires specialised knowledge and the necessity to screen a large number of excipient options before selecting the one combination that has the greatest chemical and physical stability. The product manufacturing process also requires unique equipment, as the liquid formulation is usually filled into soft gelatin capsules.

Recently, considerable effort has been devoted to the stabilisation of amorphous pharmaceuticals using excipients to trap compounds in physical configurations that have limited tendency to crystallise. Table 1 contains a list of some of these novel excipients. Foremost in this category are the polymers based on hydroxypropyl methylcellulose (HPMC)18 and its acetate succinate variation (HPMC AS).19 Pioneering work at Bend Research has shown how to create spray-dried dispersions with these and other polymers that stabilise many pharmaceuticals with poor aqueous solubility. As an alternative to spray-drying, melt extrusion has become quite popular and was the impetus for the polymeric excipient Soluplus20 and the polyvinyl alcohol product Parteck MXP.21 There has been recent progress in the quest to understand at the molecular level how these polymers work, and how to engineer even more effective polymeric solubilisers.22-24 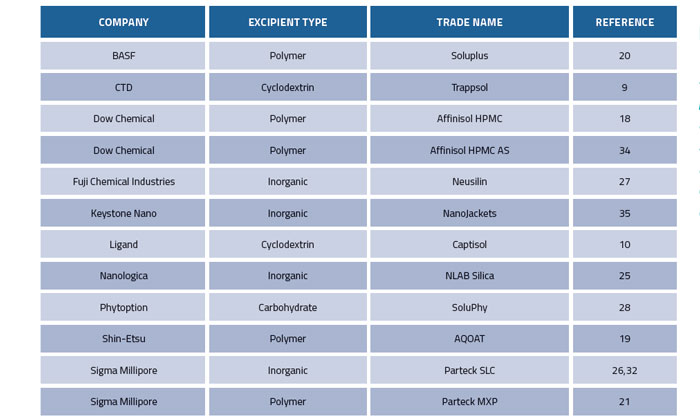 Mesoporous silica25,26 and other structured materials27,28 can solubilise APIs via an adsorption mechanism. However, to be effective as an oral product, the excipient must not only solubilise APIs but must also extend the time that the API stays in solution in vivo.29,30 Thus, researchers have employed the artificial stomach-duodenum model31 during formulation development to study prototype formulations and successfully explored combinations of polymeric and mesoporous silica excipients32,33 to enhance oral bioavailability of compounds with poor aqueous solubility.

DR HENRY HAVEL is a pharmaceutical development scientist with more than 35 years’ experience working on projects from discovery to launch. He recently retired from his position as a Senior Research Fellow at Lilly and is now the Principal Investigator for Phytoption, a Purdue University start-up. Prior to joining Lilly, Dr Havel worked at The Upjohn Company (now Pfizer), Kalamazoo, Michigan. He has a PhD in Chemistry from the University of Minnesota.