Differential scanning calorimetry (DSC) has been one of the most widely used techniques to characterise the temperature stability of monoclonal antibodies (mAbs) and provide important information in formulation optimisation. However, despite its widespread use, not all the information contained in DSC data, especially denaturation kinetics, is routinely extracted. In this article, Ernesto Freire addresses this issue. 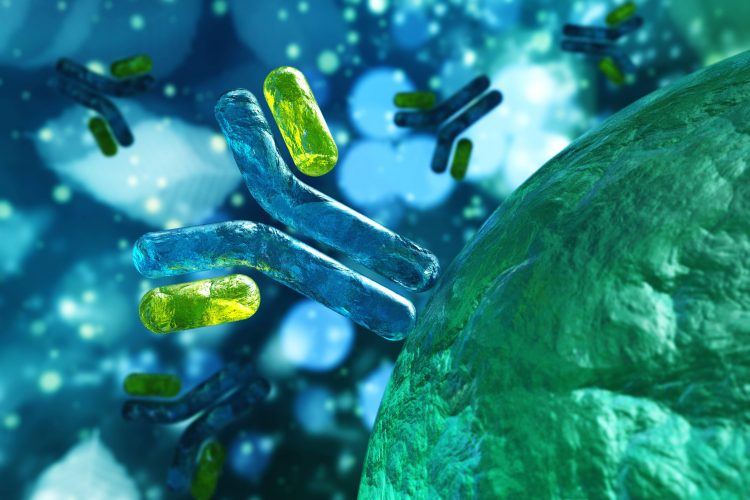 THE fasted growing segment in the pharmaceutical industry is biologics (protein drugs), especially mAbs. Traditionally, biologics have been administered intravenously in clinical settings since they are not orally bioavailable.

However, the enormous growth of biologics has triggered the need for patient self-administration in the form of subcutaneous injections. Since typical mAb doses range between 1 and 3mg/kg, formulations of up to 200mg/ml are not uncommon. At these extremely high concentrations (for comparison, albumin concentration in serum is only 35–50mg/ml) denaturation and aggregation tendencies are exacerbated. Accordingly, identification of the mAbs characterised by the lowest tendency to denature/aggregate and the formulations that minimise those tendencies are of extreme importance.

DSC measures the temperature dependence of the heat capacity function (Cp) of a protein solution. Unlike other techniques, DSC provides accurate differentiation of the different domain contributions to the denaturation process (Fab, CH2 and CH3 domains). Unfortunately, the temperature denaturation of mAbs is irreversible and conventional equilibrium thermodynamic analysis cannot be applied. Irreversible transitions are kinetically and not thermodynamically controlled. For that reason, DSC data of mAbs has mainly been used to report midpoint denaturation temperatures (Tm) or onset temperatures (Tonset) and infer potential stability trends based solely on Tm or Tonset .1

The scarcity of more complete studies is surprising since rigorous methods to analyse irreversible denaturation transitions in terms of kinetic rate equations have been available for several years after the pioneering work of Sanchez-Ruiz.2-4 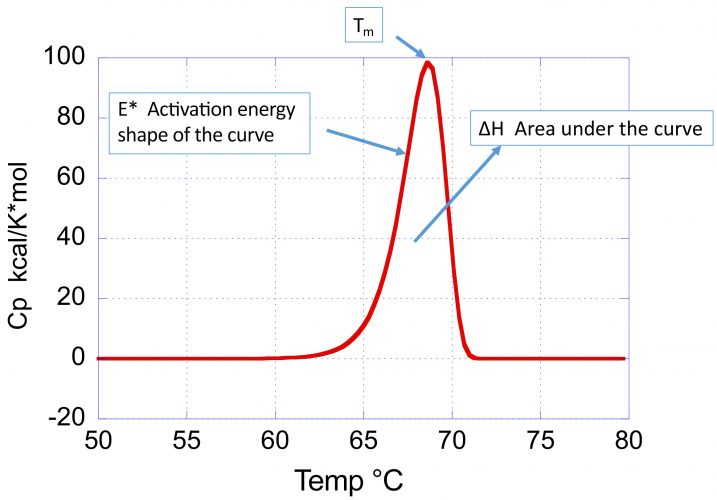 Figure 1: Typical DSC profile (heat capacity versus temperature) for an irreversible thermal denaturation transition. Notice that the curve is asymmetrical towards the low temperature end. The shape of the curve reflects three parameters: 1) the Tm, defined as the maximum in the heat capacity function; 2) the enthalpy change, ΔH, given by the area under the curve; and 3) the activation energy, E*, that defines the sharpness and skewness of the curve. The smaller the activation energy, the broader the curve and the higher the asymmetry towards the low temperature end.

Figure 1 illustrates the parameters, describing the position and shape of a DSC profile associated with an irreversible denaturation transition: 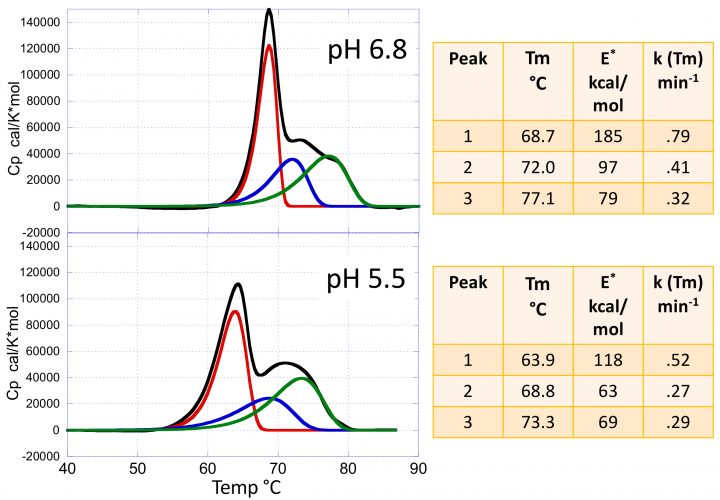 Figure 2: The heat capacity versus temperature profiles for the mAb VRC07 at pH 5.5 and 6.8. The figures also show the results of the kinetic deconvolution to three transitions. Increasing the pH from 5.5 to 6.8 not only increases the Tm of the transitions but also their sharpness and, consequently, their activation energies as shown in the insets.

Figure 2 shows typical DSC scans of the HIV‑1- neutralising mAb VRC07 (see reference 3 for a complete discussion) determined at pH 5.5 and pH 6.8. The data are composed of three transitions corresponding to the Fab, CH2 and CH3 domains. These transitions are irreversible; ie, a re-scan of the same sample does not yield any transition. In the past, the thermal denaturation of mAbs has often been analysed using the equilibrium models that come pre-packaged with the instrumentation software. Using those models, however, is not only incorrect but often produces misleading information since the equilibrium curves are rather symmetrical, while irreversible transition curves exhibit a significant asymmetry towards the low temperature end. Most importantly, an equilibrium model does not estimate the denaturation rates and activation energies. Figure 2 also shows the results of the kinetic deconvolution of the data into three irreversible transitions. It is evident that increasing the pH from 5.5 to 6.8 not only increases the Tm of the three transitions but also increases the sharpness of the profiles. A sharper transition curve is an indication of a higher activation energy. As shown in the figure, the kinetic deconvolution performs a fit of the overall curve to a sum of irreversible transitions. Non‑linear least squares analysis is used to estimate the number of transitions and the best set of kinetic parameters for each transition. For the example, increasing the pH from 5.5 to 6.8 increases the Tm of each peak as well as the activation energies, as shown in the figure.

Activation energy is the critical factor for long-term stability

Figure 3 illustrates the effects of pH on the rate of denaturation of the main peak, corresponding to the Fab domain. 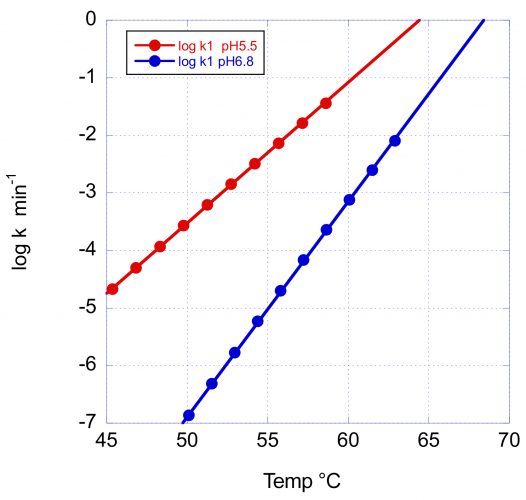 Figure 3: The temperature dependence of the denaturation rate for the main Fab transition of VRC07 at pH 5.5 and pH 6.8. In addition to the increase in Tm with pH, the larger activation energy at pH 6.8 causes a faster rate decrease and, consequently, a better long-term stability at low temperature.

In this figure, the logarithm of the rate in min-1 has been plotted as a function of temperature. At the scanning rate of these experiments (1°/min) the denaturation rates at Tm are essentially the same (0.8 and 0.5min-1); however, the rate of decrease with temperature is very different, as expected from the different activation energies. At 60°C and pH 6.8, the reported denaturation/aggregation rate measured isothermally3 is 1.8 days-1, which compares favourably with the average rate of 2.1 days-1 estimated from the DSC scan. At 50°C, the denaturation rate at pH 6.8 is expected to decrease faster and be close to three orders of magnitude slower than at pH 5.5. The difference between pH 5.5 and pH 6.8 is expected to be further amplified at lower temperatures due to the larger E* at pH 6.8. 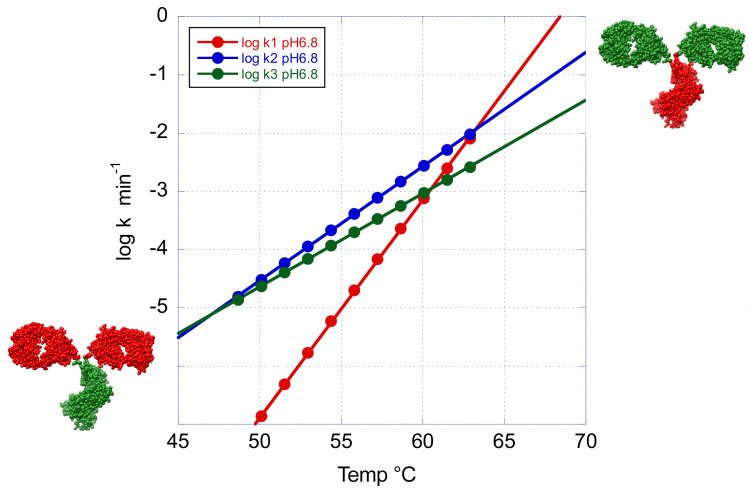 DSC contains more mAb stability information than the techniques currently used. With the recent development of novel kinetic deconvolution software, it can be expected that denaturation rates and activation energies, in addition to Tm values, will play an important role in antibody selection and formulation optimisation.

Dr Ernesto Freire is the Henry Walters Professor at the Johns Hopkins University in the US. He is a world-recognised expert in biological thermodynamics. He performs research relating to the thermodynamics of protein stability, protein‑protein interactions and protein-ligand binding. He has pioneered the development of drug design and optimisation strategies using thermodynamic techniques. Ernesto has developed new thermodynamic approaches for the characterisation of long-term stability and formulation optimisation of biologics. He is the author or co-author of over 260 publications and 15 patents.