Researchers have created a unique edible film to be added onto the surface of drugs which can produce a security key, preventing counterfeits from reaching patients. 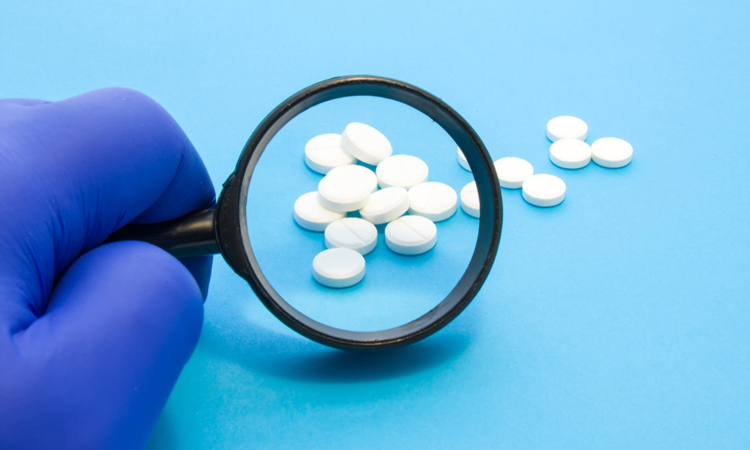 Researchers have developed an edible security tag that can be embedded into medicine to reduce counterfeit drugs on the market.

Developed at Purdue University, US, the tag acts as a digital fingerprint for each drug capsule or tablet using an authentication technique called ‘physical unclonable functions’ (PUF), which was originally developed for information and hardware security.

PUFs have the ability to generate a different response each time that they are stimulated, rendering them unpredictable and extremely difficult to duplicate. Even the manufacturer cannot re-create an identical PUF tag, say the researchers. According to the scientists, tagging drugs would help pharmacies to better verify the legitimacy of medications before they are sold. 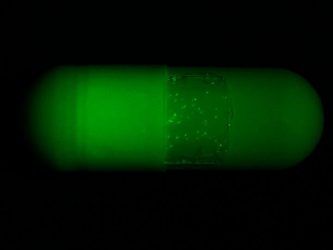 Researchers have created a silk film ‘security tag’ to go on the surface of drug capsules. The photo was taken with a green filter for visibility (credit: Purdue University photo/Jung Woo Leem).

“Every single tag is unique, offering a much higher level of security,” said Young Kim, an associate professor in Purdue’s Weldon School of Biomedical Engineering.

To make them edible, the group created a thin, transparent film made of silk proteins and fluorescent proteins genetically fused together. As the tag is easily digestible and made entirely of proteins, it can be consumed as part of a pill or tablet.

Shining various LED light sources on the tag excites the fluorescent silk microparticles, causing them to generate a different random pattern each time. The microparticles emit cyan, green, yellow or red fluorescent colours. Parts of the patterns can then be digitally extracted  to produce a security key, which a pharmacy or patient would use to confirm that a drug is authentic.

The researchers are currently converting this process to a smartphone app for both pharmacies and consumers.

“Our concept is to use a smartphone to shine an LED light on the tag and take a picture of it. The app then identifies if the medicine is genuine or fake,” said Jung Woo Leem, a postdoctoral associate in biomedical engineering at Purdue.

The tag also has the potential to hold much more information than simply a confirmation of what the drug is, Leem said, such as the dose and expiration date.

Leem found that the tag works for at least a two-month period without the proteins degrading. Next, the team will need to confirm that the tag could last as long as a drug does and that it does not affect a medicine’s key ingredients or potency.

The study is published in Nature Communications.