Researchers have created a microneedle array that successfully delivered a COVID-19 vaccine to mice, allowing them to produce antibodies against the virus. 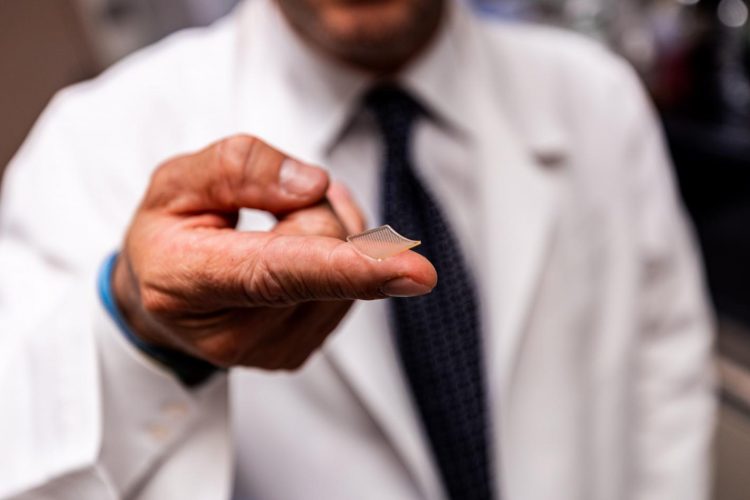 The vaccine is delivered into the skin through a fingertip-sized patch of microscopic needles [credit: UPMC].

A potential vaccine with a novel form of drug delivery has been developed to combat SARS-CoV-2, the coronavirus causing the COVID-19 pandemic. Researchers at the University of Pittsburgh School of Medicine, US, say that their new vaccine has shown efficacy when tested in mice.

The Pittsburgh Coronavirus Vaccine (PittCoVacc) is delivered through a fingertip-sized patch and induces the production of antibodies specific to SARS-CoV-2 at quantities thought to be sufficient for neutralising the virus.

“We had previous experience on SARS-CoV in 2003 and MERS-CoV in 2014. These two viruses, which are closely related to SARS-CoV-2, teach us that a particular protein, called a Spike (S) protein, is important for inducing immunity against the virus. We knew exactly where to fight this new virus,” said co-senior author Dr Andrea Gambotto, associate professor of surgery at the Pitt School of Medicine. “That’s why it’s important to fund vaccine research. You never know where the next pandemic will come from.”

Compared to the experimental mRNA vaccine candidate that has just entered clinical trials, PittCoVacc follows a more established approach, using lab-made pieces of viral protein to build immunity. When tested in mice, PittCoVacc generated a surge of antibodies against SARS-CoV-2 within two weeks of administration.

The researchers used a new approach to deliver the drug, called a microneedle array, to increase potency. This array is a fingertip-sized patch of 400 tiny needles that delivers the S protein pieces into the skin, where the immune reaction is strongest. The patch is applied similarly to a plaster and then the needles, made entirely of sugar and the protein pieces, dissolve into the skin.

“We developed this to build on the original scratch method used to deliver the smallpox vaccine to the skin, but as a high-tech version that is more efficient and reproducible patient to patient,” said co-senior author Dr Louis Falo, professor and chair of dermatology at Pitt’s School of Medicine and UPMC.

According to the vaccine developers, the system is highly scalable. The protein pieces are manufactured by a ‘cell factory’ – multiple layers of cultured cells engineered to express the SARS-CoV-2 S protein – that can be stacked further to multiply yield. Purifying the protein can be conducted at industrial scale. Mass-producing the microneedle array involves spinning down the protein-sugar mixture into a mould using a centrifuge. Once manufactured, the vaccine can sit at room temperature until it is needed, eliminating the need for refrigeration during transport or storage. 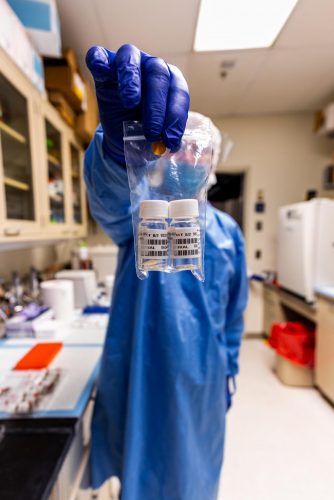 “For most vaccines, you don’t need to address scalability to begin with,” Gambotto said. “But when you try to develop a vaccine quickly against a pandemic that’s the first requirement.”

The researchers emphasise that the SARS-CoV-2 microneedle vaccine maintains its potency even after being thoroughly sterilised with gamma radiation – a key step toward making a product that’s suitable for use in humans.

“Testing in patients would typically require at least a year and probably longer,” Falo said. “This particular situation is different from anything we’ve ever seen, so we don’t know how long the clinical development process will take. Recently announced revisions to the normal processes suggest we may be able to advance this faster.”

The paper appears in EBioMedicine, which is published by The Lancet.

University of Pittsburgh School of Medicine

University of Pittsburgh School of Medicine