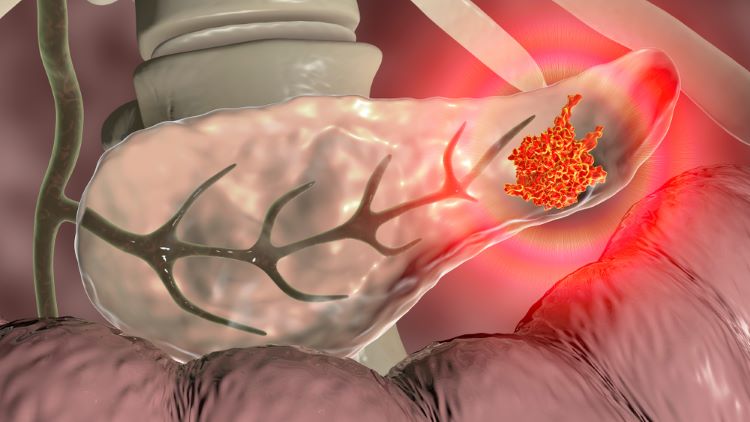 “For the first time, a clinical study in the first-line setting for mPDAC demonstrated superior overall survival (OS) and progression-free survival (PFS) for an investigational regimen when compared to standard of care treatment with nab-paclitaxel and gemcitabine.”

Onivyde is a long-circulating, liposomal topoisomerase inhibitor. The cancer medicine blocks the enzyme topoisomerase I, which is involved in copying cell DNA needed to make new cells. By blocking the enzyme, cancer cells are prevented from multiplying and eventually die. In Onivyde, irinotecan is enclosed in tiny fat particles called ‘liposomes,’ which accumulate in the tumour and release slowly over time.

About the Phase III trial for pancreatic ductal adenocarcinoma

NAPOLI 3 is a randomised, open-label Phase III trial of Onivyde treatment regimen (NALIRIFOX) in patients who have not previously received chemotherapy for metastatic pancreatic ductal adenocarcinoma. The study enrolled 770 patients across 205 trial site locations in 18 countries. Patients were randomised to receive Onivyde plus 5 fluorouracil/leucovorin and oxaliplatin (NALIRIFOX regimen; n=383) twice in a month (days 1 and 15 of 28-day cycle) compared to an injection of nab-paclitaxel and gemcitabine (n=387) administered three times a month (days 1, 8, 15 of a 28-day cycle).

At the median follow-up of 16.1 months, the regimen met its primary endpoint, demonstrating a statistically significant improvement in OS of 11.1 months compared to 9.2 months for patients treated with nab-paclitaxel and gemcitabine (HR 0.83 [95 percent CI 0.70–0.99]; p=0.04). This reflects data included in the ASCO GI presentation. These data describe the final analysis after acceptance of the abstract.

In the trial, the safety profile of NALIRIFOX was manageable and consistent with the profiles of the treatment components.

Ipsen, who developed the treatment, plans to file a supplemental New Drug Application with the US Food and Drug Administration (FDA) for Onivyde in combination with oxaliplatin plus 5- fluorouracil/leucovorin for patients with previously untreated mPDAC.

Onivyde is currently approved in most major markets including the US, Europe and Asia in combination with fluorouracil (5-FU) and leucovorin (LV) for patients with metastatic adenocarcinoma of the pancreas after disease progression following gemcitabine-based therapy.

Howard Mayer, Executive Vice President and Head of Research and Development for Ipsen, concluded by emphasising the importance of the Phase III results: “Very few clinical studies in metastatic pancreatic ductal adenocarcinoma have demonstrated efficacy in the past few decades.”