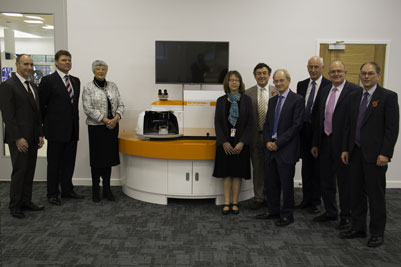 On Monday 10th November, Dame Janet Trotter, Her Majesty’s Lord-Lieutenant of Gloucestershire, presented Renishaw with its seventeenth Queen’s Award. This prestigious award was granted for the continuous development of the company’s inVia Raman microscope, with ultra-fast Raman imaging, which enables the rapid generation of high definition 2D and 3D chemical images for material analysis.

This Queen’s Award for Enterprise 2014, granted in the Innovations category, is particularly special, as it is the first to recognise Renishaw’s achievements outside of the field of industrial metrology.

The Lord-Lieutenant was welcomed to Renishaw headquarters at New Mills, Wotton-under-Edge, by Sir David McMurtry, the company’s Chairman and Chief Executive. Simon Holden, Director and General Manager of the Spectroscopy Products Division, and Sue Farrow, Senior Buyer, accepted the award which was in the form of a crystal bowl engraved with the Queen’s Award Emblem. The citation was read by Peter Bungard, Chief Executive of Gloucestershire County Council, and Clerk to the Lieutenancy.

Speaking to Renishaw employees about their success, Dame Janet said, “You all know that you work for an absolutely excellent company. Excellence doesn’t just happen. It takes quality leadership; setting a culture, inspiring, motivating and nurturing. You recruit the right people and you live the company values. You have a passion for creating high quality products and I’m really impressed by your capacity to innovate.”

She added, “One of the great things about today is not just that this is the first (Queen’s) Award for the Healthcare Division but also that you have pushed your skills and techniques further to recreate and innovate with a new product. Many congratulations to you and your team on this excellent achievement; it is a first for Renishaw.”

In response, Simon Holden thanked Dame Janet for presenting the award and said, “inVia is our flagship product and the scientists and engineers who have helped design, develop and continuously innovate this product are, I hope, justifiably proud of what they have achieved. But this award also recognises significant business improvement and outstanding commercial success; success that can only be achieved by the combined efforts and commitment of everyone across all departments in the Spectroscopy Products Division. It is your commitment and time that has won this award and I would like to offer my personal thanks for what you have contributed. Not only have you won this award for Renishaw but you have also produced the world’s best-selling and highest-performing confocal Raman spectrometer.”

The Queen’s Awards for Enterprise are the UK’s most prestigious awards for business performance, which recognise and reward outstanding achievement by UK companies.