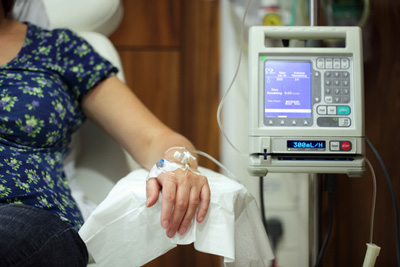 Women with advanced ovarian cancer may benefit more from immunotherapy drug treatments if they are given straight after chemotherapy, according to a new study.

Researchers, funded by Cancer Research UK and based at Queen Mary University London, examined samples from 60 women with ovarian cancer and found that chemotherapy given prior to surgery activates specialised immune cells called T cells within the tumour. But while the chemotherapy activated T cells it also boosted the cancer’s defences against immune attack – cancers had higher levels of PD-L1 that stops T cells from recognising and destroying cancer cells.

As a result, the research findings suggest that drugs that boost the immune system would be most effective if given after chemotherapy and the most effective immunotherapy treatments will have to block the PD-L1 protein to allow T cells to target the tumour most effectively.

Commenting on the research,  Professor Frances Balkwill, based at the Barts Cancer Institute at Queen Mary University of London, said: “Our study suggests that to give patients the best results not only do the immunotherapy drugs need to be given straight after chemotherapy but they also have to able to block PD-L1. Clinical trials are now needed to test this theory. This same approach could also be extended to other kinds of cancer where the same types of chemotherapy are used, such as lung cancer.”

The study also revealed that women who did not respond well to chemotherapy still had increased levels of T cells suggesting that this type of immunotherapy could help treat all patients whether or not they had responded to chemotherapy.

Professor Peter Johnson, Cancer Research UK’s chief clinician, said: “Treating advanced ovarian cancer is difficult, and in many women unfortunately the cancer returns after initial surgery and chemotherapy treatments. We urgently need new treatments to change this. This interesting information about how the immune system may change after chemotherapy may point us to the best way of using new immunotherapy drugs in ovarian cancer.”