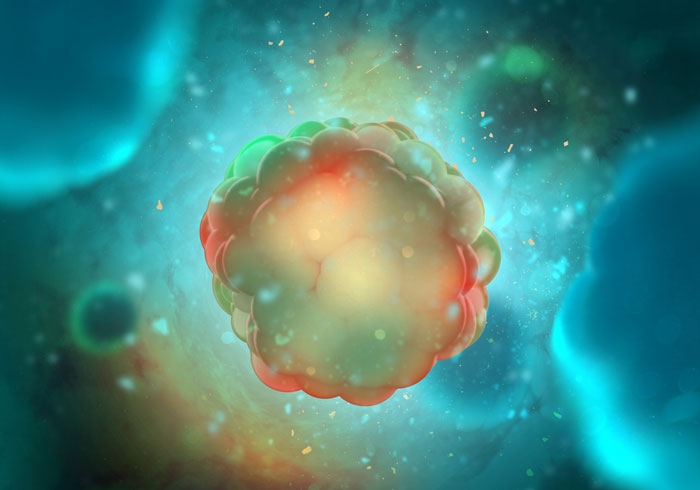 A new study has shown the recently approved breast cancer drug neratinib can block the function of the Ras genes — H-Ras, K-Ras and N-Ras — which are among the first to be linked to cancer development, and as well as several other oncogenes through an unexpected process.

The study set out to determine whether neratinib could be utilised, alone or in combination with other agents, to kill non-small cell lung cancer (NSCLC) cells that had become resistant to the drug afatinib. Both afatinib and neratinib were designed to inhibit EGFR and HER2 kinases, which are enzymes that regulate cancer cell growth and chemotherapy resistance.

When we looked at the cells under the microscope, we saw neratinib, but not afatinib, causing large vesicles to form next to the cell’s outer membrane.

Afatinib is similar to neratinib, however, neratinib irreversibly attaches itself onto EGFR and HER2. This attachment permanently blocks the function of the receptors, causing the cell to target them for degradation. Dr Paul Dent who is the Universal Corporation Chair in Cancer Cell Signaling and a member of the Cancer Cell Signaling research program at Massey and this team at the  VCU Massey Cancer Center showed that neratinib can, in fact, kill afatinib-resistant NSCLC cells.

“When we looked at the cells under the microscope, we saw neratinib, but not afatinib, causing large vesicles to form next to the cell’s outer membrane. In these vesicles, we saw the EGFR and HER2 receptors being broken down, but we also saw our negative control receptor, c-MET,” said Dr Dent. “In science, a negative control experiment is something that isn’t expected to work, thereby further validating what you were trying to prove. We thought, ‘if neratinib can take down c-MET even though it doesn’t attach to it, maybe it can take down other membrane proteins.'”

The vesicles the researchers saw were part of a process known as autophagy, a natural mechanism that breaks down and recycles unwanted cellular components. Because it is a membrane protein, the scientists turned their attention to Ras. And because of evidence that the common seizure medication valproic acid can influence the regulation of autophagy, they decided to test whether it could synergize with neratinib to further block the actions of Ras.

In addition to the afatinib-resistant NSCLC cells, the researchers tested the neratinib and valproic acid combination on cell lines derived from human pancreatic and ovarian cancers containing K-Ras mutations and N-Ras mutations, respectively.

“We found that neratinib triggers a seismic event in the plasma membrane where not only are ERBB family receptors such as EGFF and HER2 degraded, but other related receptors in the membrane are brought along for the ride,” said Dr Dent. “We plan to conduct additional experiments to better understand the process, but the result was rapidly reduced expression of mutated K- and N-Ras.”

Dr Dent currently has another manuscript in press at the journal Cancer Biology and Therapy, which is a follow-up study detailing additional findings from his experiments. As he works to better understand the biology of neratinib-induced Ras inhibition,  Dr Dent hopes his laboratory findings can be validated in clinical trials testing a combination of neratinib and valproic acid in patients with afatinib-resistant NSCLC.

We are excited about the potential of neratinib to treat a variety of cancers.

In addition, the study uncovered other exciting clinical possibilities for neratinib. The scientists tested neratinib in animal models of breast cancer and found that it enhanced the effectiveness of previously established drug combinations, including pemetrexed and sorafenib, which is currently being tested in a phase 2 clinical trial at Massey for the treatment of triple negative breast cancer. Dr Dent is collaborating with Massey clinical researchers to propose a study investigating the effectiveness of the combination of neratinib, sorafenib and pemetrexed in all advanced solid tumours.

“We are excited about the potential of neratinib to treat a variety of cancers and complement existing therapies,” said Dr Dent. “We are creating clinical trial concepts and hoping to secure funding to test them. Because neratinib is already approved by the FDA, as is valproic acid, we’re hopeful that we can translate our findings to the clinic relatively quickly once funding is secured.”

The study has been published in the journal Oncotarget.