Glatiramer acetate, a drug used to treat multiple sclerosis, has been found to have an effect on drug-resistant bacteria… 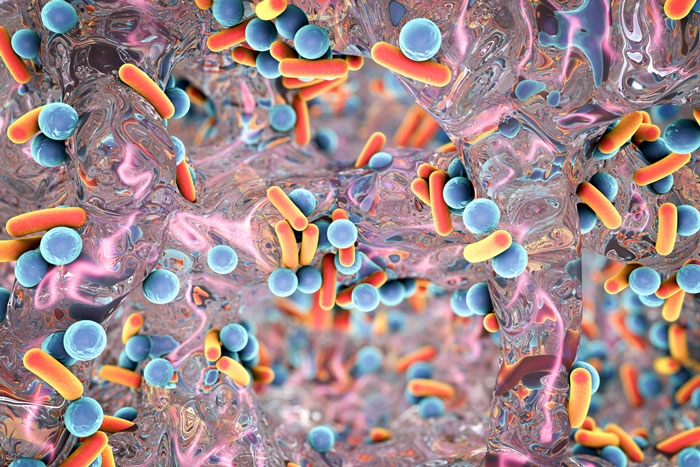 Researchers have discovered that glatiramer acetate, which is used to treat multiple sclerosis, has an unknown effect on drug-resistant bacteria.

Laboratory experiments have shown that the drug kills half of the Pseudomonas bacteria in specimens from patients with cystic fibrosis who are often exposed to the bacteria in the lungs.

“We see great perspectives in the discovery because our data shows that the drug is effective against infections that occur because of what are known as Gram-negative bacteria. These bacteria form the basis of diseases such as pneumonia, cystitis and septic shock. Due to growing resistance, we are experiencing a decline in the number of effective treatments against them, and some of the medicaments which we otherwise know to be effective must be given in such high doses to be effective that they become toxic for the patients,” explains Professor Thomas Vorup-Jensen from the Department of Biomedicine at Aarhus University.

The research project is part of a new global movement within the development of medicine that focuses on medicine recycling or, as it is also called, repurposing. This is where researchers and companies test already approved medicines or substances on other diseases or functions of human biology than those they were originally developed for.

“It is extremely expensive to develop new medicines and it takes around ten years to get a medicament thoroughly tested and ready for patients. We cannot wait that long in the fight against resistant bacteria. Glatiramer acetate has been used to treat multiple sclerosis for over twenty years and is known to be a safe drug that does not cause many serious side effects. The fact that it now turns out to be anti-bacterial is completely new to us. This gives us the opportunity to develop a more effective treatment for patients with cystic fibrosis, for example, for whom we otherwise have had poor treatment options,” says Prof Vorup-Jensen.

The discovery also opens up for a new view of multiple sclerosis.

“The results give us greater knowledge about how the drug works on sclerosis patients and indicates at the same time that bacteria might be part of the problem with the disease. This is also indicated by some studies,” says Prof Vorup-Jensen.

The research results have been published in the scientific journal Scientific Reports.