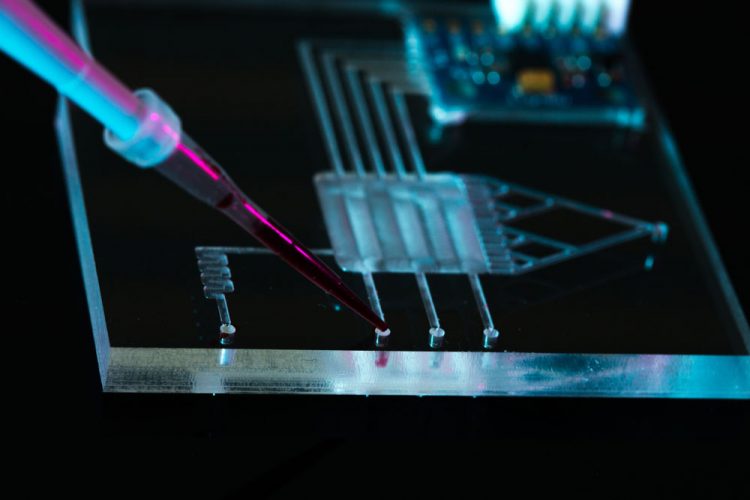 Researchers have set up a novel lab-on-a-chip with accompanying automatic analysis software this integrated setup can be used to study gene regulation in single bacterial cells in response to dynamically controlled environmental changes.

It is hardly bigger than a matchbox and yet there is a laboratory en miniature on this chip. Single bacterial cells grow in about 2000 channels of a thousandth of a millimetre in diameter and can be individually studied in detail by the researchers in Professor Erik van Nimwegen‘s group at the Biozentrum, University of Basel. By recording thousands of microscopic images at short time intervals, the precise growth and behaviour of many generations of individual E. coli bacteria can be tracked over several days.

The huge amount of raw data generated is automatically analysed and precisely quantified by new image-analysis software called MoMA. The software was developed in collaboration with scientists from Professor Gene Myers’ research group at the Max Planck Institute of Molecular Cell Biology and Genetics in Dresden.

Using the new system the researchers can now study precisely how genes are regulated in single cells under changing environmental conditions. This way, they do not only gain insights into gene regulatory processes but also an overview of the diversity of adaptive responses of bacteria to varying environments.

A microfluidic system for tracking growth and gene expression of single bacteria. (University of Basel, Biozentrum)

For example, it is possible to investigate how individual bacterial cells respond to a sudden exposure to an antibiotic: whether they die, stop growing, or simply continue to divide undisturbed. It is also possible to observe the antibiotic’s increasing effect duration on the cells. This is important to understand why antibiotics do not always kill all pathogens.

“With the microfluidic chip we can also answer, how bacteria communicate with each other, how they respond to stress or whether the relationship of bacterial strains plays a role in adaptation strategies,” says Prof van Nimwegen. “Such single-cell analyses are very important because measurements of entire cell communities are often misleading since all the heterogeneity of the single cells has been averaged out.”

The researchers demonstrated the efficiency of the chip laboratory using a model system of gene regulation, the Lac-Operon. “We have used green fluorescent protein to observe how E. coli bacteria respond to alternating nutrient changes from glucose to lactose. The Lac-Operon has been studied for more than 50 years, and still, we discovered new important properties when looking at it with single-cell resolution,” says Prof van Nimwegen.

In the first round, the bacteria switched to lactose turnover with a time lag. However, repeated switching from glucose to lactose led to a much faster adaptation of the cells as they started growing much earlier. “Surprisingly, the lag times are similar in genetically related cells suggesting that bacteria retain a memory of the behavior of their ancestors.”

This system is suitable for a wide range of applications. All relevant information on chip design and experiments, the MoMA software for image analysis, as well as the raw data acquired in this study are openly available online.

The study has been reported in Nature Communications,