Researchers at Vanderbilt University Medical Center have used an integrated imaging approach to probe an invasive Staphylococcus aureus (‘staph’) infection in a mouse model, revealing new insights about staph infections that can be broadly applied to other diseases. 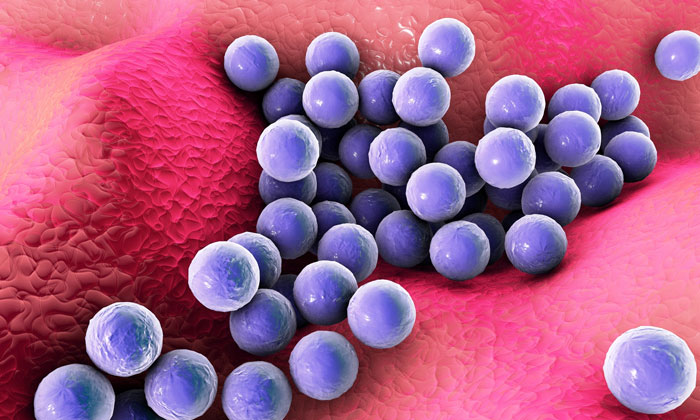 The team of scientists, that include Eric Skaar, PhD, MPH, Ernest W. Goodpasture professor of Pathology and James Cassat, MD, PhD, assistant professor of Pediatrics at Vanderbilt, combined multiple types of molecular imaging to study the Staphylococcus aureus (staph) infection. Commenting on the results of the 3D molecular-level views provided by the technique, Skaar said: “I’m pretty convinced that these are the most advanced images in infection biology,”

Antibiotic-resistant forms of staph are a leading cause of hospital-acquired infections, infectious heart disease, and pus-forming skin and soft-tissue infections. The unique imaging resources available at Vanderbilt enabled the scientists to achieve unprecedented 3D imaging of the bacterial infections.

The impetus for their study was to investigate the battle between host and pathogen for limited nutrients, particularly such metals as iron, zinc and manganese. Identifying molecules involved in this struggle could point to novel diagnostic and therapeutic targets for infectious diseases. Over the past several years, the investigators have used various imaging modalities to study infection. Each approach has its own strengths, Skaar says. Magnetic resonance imaging (MRI), for example, shows how the physical anatomy changes in response to infection, while mass spectrometry reveals specific molecules with high sensitivity. Bioluminescence imaging (BLI) allows researchers to study changes in gene expression in vivo.

“We came up with this idea of putting all of these imaging modalities together to ask really exciting questions,” Skaar said.

“When a mouse is infected with a horrible pathogen like staph, can we see how infection damages the tissue, how metals and metalloproteins (metal-binding proteins) are affected, and how bacteria change gene expression, all in one experiment?”

Approach successful for staph – and other infections

Their studies showed that “not all abscesses are created equal,” Skaar said. Historically, abscesses – the area of inflammation around a bacterial infection – have been considered to be identical and simply “big bags of pus.” But Skaar and his team found that abscesses, even in the same tissue, have different molecular environments. Some metals are excluded from all abscesses, and some metals are in one abscess, but not in another. Within an abscess, the metal distribution is not uniform, suggesting an underlying abscess substructure, Skaar noted.

The team found that the staph bacteria responded to this molecular heterogeneity by expressing different genes in different abscesses. This observation could not have been made using standard techniques that combine all abscesses together. The findings have implications for vaccine and therapeutic development.

“We can use these imaging modalities to identify proteins that are always expressed by the bacteria, as opposed to genes that are differentially expressed depending on the environment that the bacteria experience. Those factors would be excellent drug targets,” Skaar said.

The researchers also discovered that a key immune defense protein in neutrophils does not reach the bacterial cells. This is visible on one of their images, as Skaar points out: “the immune protein made by neutrophils is a blue cloud, coming to get the bacterial microcolony,”.

“There is a demilitarised zone in between the neutrophil protein and the bacterial microcolony,” Skaar said, noting that the investigators do not know what is in this zone. “Whatever staph is doing, it’s excellent at keeping the immune system from getting to it.”

The multi-modality imaging approach is a powerful tool for making basic science discoveries about the host-pathogen interaction, which could reveal new therapeutic targets.

Using imaging to identify bacterial proteins might also be useful for diagnosing an infectious agent – and assessing its resistance to certain antibiotics – without having to culture it, Skaar said. Culture-free diagnosis would require a tissue sample that is amenable to imaging mass spectrometry.

This study was reported in Science Translational Medicine.