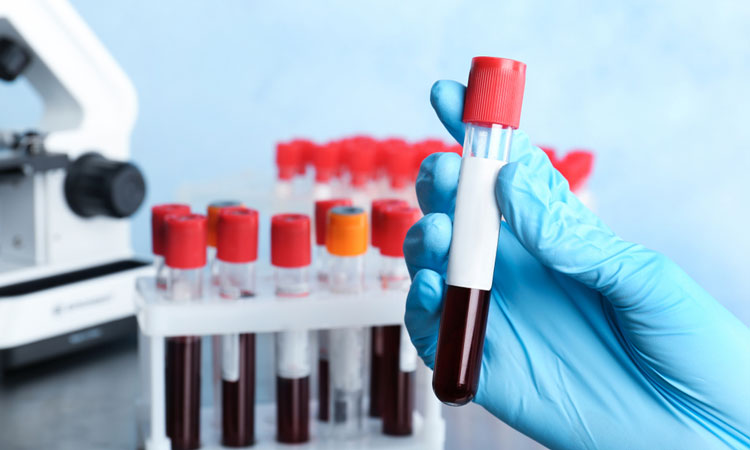 A technique to get more information from the blood of cancer patients than previously possible has been developed.

The discovery could potentially accelerate early diagnosis, speed up drug discovery and lead to advancements in personalised medicines. Thestudy was funded by Cancer Research UK.

The scientists, from the University of Manchester, collected blood samples from women with advanced ovarian cancer who were treated with a type of chemotherapy called CAELYX. This chemotherapy drug is contained in a soft, lipid-based nanoparticle, called a liposome, which acts as a vessel to help minimise side effects.

Women gave a sample of blood, following an injection of CAELYX over a course of 90 minutes as part of their treatment. By extracting the injected liposomes, the scientists were able to detect a wide variety of biomolecules that stuck to the surface of the liposome – called the ‘biomolecule corona’.

Professor Kostas Kostarelos, lead author from the University of Manchester, said: “We’re astonished at how rich the information was on the surface of the liposomes taken from the blood. We hope this technique could be a springboard for further research, from monitoring disease progression or recurrence, to identifying which treatment is best for each patient and potentially finding new biomarkers for early diagnosis.”

This is a step forward in developing a better technique to gather information from patients’ blood – a ‘halo effect’ of biomolecules sticking to the liposomes has been seen before, but only after dipping the nanoparticles in blood samples in a tube outside the patient’s body.

Dr Marilena Hadjidemetriou, study author from the University of Manchester, said: “The blood is a potential goldmine of information, but there’s a challenge to amplify cancer signals that would otherwise be buried within the ‘noise’.

“More abundant proteins mask rarer and smaller molecules that could be significant in helping us to understand disease progression or finding potential new drug targets. This technique overcomes this challenge.”

Professor Caroline Dive, Cancer Research UK’s expert in liquid biopsies, said: “Finding a test to help diagnose, track and treat cancer is something many scientists are pursuing. Liquid biopsies are quicker, cheaper and less invasive than many other tests, and this technique is an important early step in developing such a test. Further work will reveal what the information captured using liposomes can tell us about the disease.”

The researchers now hope to use this technique in mice to help find the best patterns of biomarkers to identify cancers in the early stages of disease as part of their Cancer Research UK Pioneer Award, which funds innovative ideas from any discipline that could revolutionise our understanding of cancer.

The study was published in Advanced Materials.