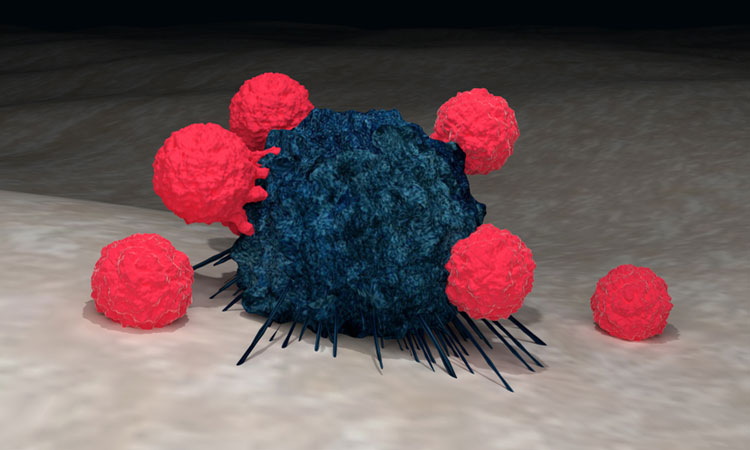 A follow-up analysis of patients enrolled in a Phase I/II multi-centre trial for diffuse large B-cell lymphoma (DLBCL) reported 51 percent of patients receiving an anti-CD19 chimeric antigen receptor (CAR-T) called axi-cel were still alive two years post-treatment. Axi-cel was approved by the US Food and Drug Administration for treatment of DLBCL in October 2017 and by the European Commission in August 2018.

The study was co-led by Dr Sattva Neelapu, Professor of Lymphoma & Myeloma at The University of Texas MD Anderson Cancer Center.

“This two-year assessment demonstrates that the CAR-T axi-cel can induce durable remissions in a substantial proportion of patients with an acceptable long-term safety profile,” said Prof Neelapu. “There also is evidence of gradual B-cell recovery in most patients with refractory large B-cell lymphoma who otherwise have limited treatment options.”

With a median follow-up of 27.1 months for 101 patients enrolled in Phase II, the study found that 83 percent of patients achieved a reduction in cancer activity tied to treatment, known as an objective response; 58 percent had no detectable cancer or a complete response, and 39 percent reported ongoing responses. Median overall survival was not reached, and no axi-cel related adverse effects were reported after the 12-month period.

A subsequent “real-world” assessment of 274 patients who received the CAR-T axi-cel, post FDA-approval of the therapy revealed similar results to the overall ZUMA-1 study. The real-world retrospective study included 17 centres that contributed data independent from the manufacturer-funded trial.

Findings from the study, also led by Dr Loretta Nastoupil, Assistant Professor of Lymphoma & Myeloma, were presented Dec. 1 at the ASH Annual Meeting & Exposition. By day 90, the real-world assessment reported 81 percent of patients had an objective response and 57 percent had a complete response.Remove term: Dr Sattva Neelapu Dr

“Although limited by a relatively short follow up, 90-day responses in the real-world setting are comparable to the best responses observed in the pivotal ZUMA-1 clinical trial,” said Nastoupil. “Importantly, safety appears comparable to the ZUMA-1 trial despite nearly half of patients failing to meet ZUMA-1 eligibility criteria.”

The study was reported in the journal The Lancet Oncology.

First biosimilar to HUMIRA® available in US

Moderna joins the Association of the British Pharmaceutical Industry