Scientists have developed a hydrogel-based carrier that can deliver siRNAs directly to where they are needed. 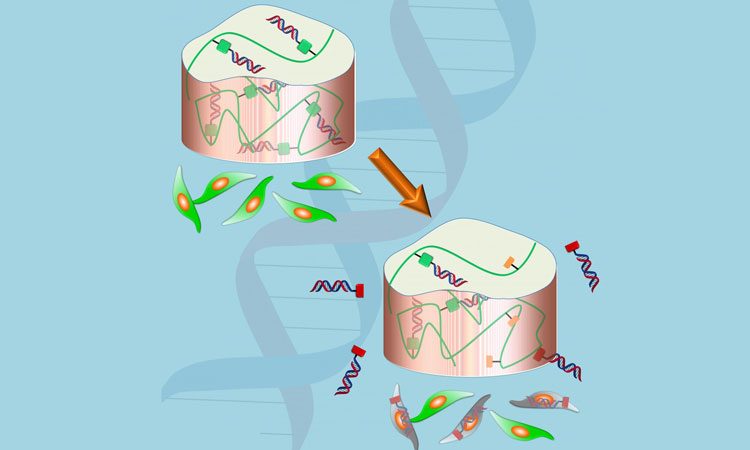 Scientists have developed a hydrogel-based carrier that can deliver small interfering RNA (siRNAs) directly to where they are needed.

Biologically compatible hydrogels have been used to deliver biologics or drugs directly to specific areas in the body. A drug-infused hydrogel plug or sheet can be placed directly where the drug is needed. But one problem has been that these drugs often diffuse out rapidly to surrounding cells and tissues. The release can be delayed by changing the porosity of the hydrogel, its degradation rate and by altering with the affinity of the drug for the hydrogel.

Now, Eben Alsberg, the Richard and Loan Hill Professor of Bioengineering and Orthopaedics at the University of Illinois at Chicago, US, together with Matthew Levy, associate professor of biochemistry at Albert Einstein College of Medicine, US, and their colleagues have developed a unique hydrogel strategy that allows for more control over the release of siRNAs over time.

By chemically coupling the siRNA to the hydrogel via a linker that can degrade in the body, they can control the release of the drug. When it is placed in a water-based environment, water breaks the linker between the siRNA and the hydrogel, releasing the drug.

In this kind of system, the release of the drug is prolonged compared with when the siRNA is only physically trapped within the hydrogel.

“We may be able to use this technology in the future to, for example, prevent the production of certain proteins that are known to promote certain diseases, or to help transform stem cells into cells needed to repair damaged tissue such as bone or cartilage,” said Alsberg.

These findings have been reported in Science Advances.

Albert Einstein College of Medicine, University of Illinois at Chicago

Albert Einstein College of Medicine, University of Illinois at Chicago

EMA to fast-track development of COVID-19 vaccines and therapeutics