The first gene therapy products are appearing commercially and the field is growing rapidly with over 350 clinical trials taking place in H1 of 2019 alone. So why is this area attracting so much attention? Dr Philip Probert and Dr Stuart Jamieson discuss the potential of gene therapy and the processes involved in the manufacture of viral vectors. 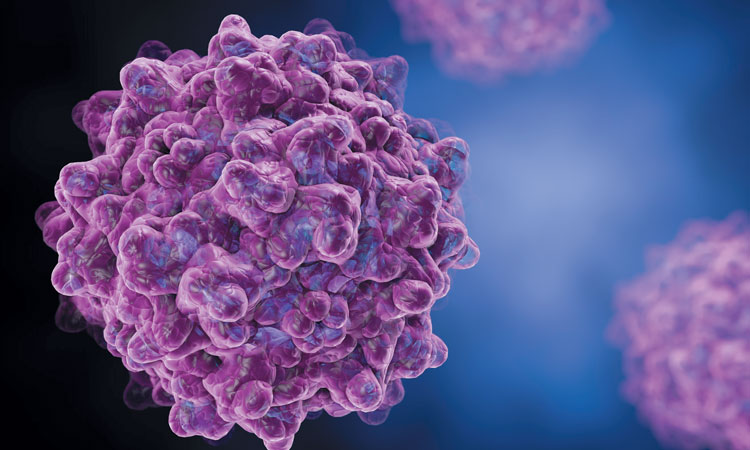 The introduction of bio-pharmaceuticals to healthcare has created a step change in the range of conditions that can be treated with improved efficacy. Over the last 20 years, this has led to the sector gaining an overall value of over $200 billion in 2018, estimated to increase to almost $500 billion in 2025.1 In tandem, biologics have knocked the majority of small molecule products from the lists of top-selling drugs. Existing biotherapeutic products are almost exclusively recombinant proteins that treat disease through a diverse set of mechanisms; for example, supplementing a protein that a patient is unable to express in sufficient quantity (eg, insulin for treatment of diabetes) or unmasking neoplastic cells, thus enabling the innate immune system to identify and destroy cancer cells (eg, checkpoint inhibitor atezolizumab blocking PD-L1 for the treatment of certain cancers).

With the revolution in genetics that has occurred since the discovery of the structure of DNA in the 1950s, it is now clear that many diseases have genetic causes. With the accompanying revolution in understanding of genetic engineering, one approach to treating these genetic conditions is through genetic medicine.

Gene therapy adopts a different paradigm to recombinant protein-based biopharmaceuticals. Rather than a protein being the therapeutic, gene therapy uses nucleic acids as the mechanism of treatment. Most commonly, a vector (typically a recombinant, replication deficient virus) is used to deliver gene-encoding DNA to genetically defective cells. These cells then use their own expression machinery and delivered DNA template to express the protein and restore full function. Compared to protein therapies whose duration is limited and therefore requires repeated dosing, the advantage of genetic therapies is that treated cells will continue to express the introduced gene years later, thereby effectively providing a cure.

Gene therapy was first successfully demonstrated in 1991, when two patients suffering from an inherited immunodeficiency (ADA-SCID) were successfully treated through restoration of immune function. In the following decades, the various hurdles associated with gene therapy (eg, immune responses, genotoxicity and duration of transgene expression) have been identified and strategies developed to circumvent them. The market is continuing to develop, and following the release of Glybera, the first gene therapy to achieve market approval, new products are continuing to reach the market.

One of the main viral vectors used for in vivo gene therapy is adeno-associated virus (AAV). AAV is a true nanoparticle, approximately 20nm in diameter (see main image opposite), comprising an outer capsid (made up of three proteins) that contain the mainly single-stranded DNA being delivered by the virus.

AAV is an opportunistic parasite and no human complications from infection have been identified to date. The virus maintains a basic genome encoding the viral protein capsid genes (Cap) and the DNA replication gene (Rep). The virus replicates when the cell harbouring it is infected by another virus. All other production and replication functions are provided in trans by cellular and infecting virus. As a vector for gene therapy, compared to most other viral vectors considered for therapeutic use, AAV is less immunogenic and therefore most of the in vivo gene therapy products available in the clinics to date, use AAV as the vector.

Since this virus has a comparatively simple genome and lifecycle, it is amenable to large-scale production. However, compared to recombinant proteins, viruses pose unique challenges for manufacturing due to their increased complexity.

Specifically, the virology of AAV vectors provides major challenges for their production for therapeutic use in three main areas:

To produce recombinant AAV viral vectors, three plasmids need to be used to transfect the cells being used to produce the virus (typically, a strain of HEK293 [human embryonic kidney cells]).

The three plasmids are: 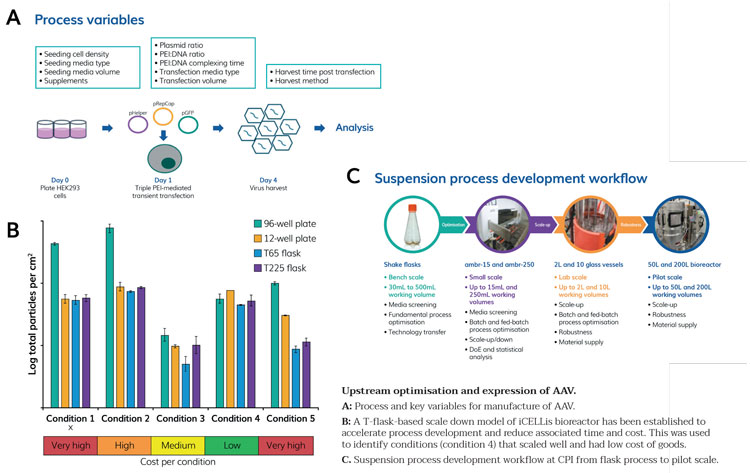 The upstream process for AAV manufacture in an adherent system is shown in Figure 1A, including some of the key process variables. Essentially, once cells are at the appropriate density, they are transfected with the aforementioned three plasmids, which are complexed to PEI (polyethylenimine) to enable cell uptake of the plasmids. Three days after transfection, the cells are harvested and the virus recovered from the cells and/or supernatant, dependent on the serotype of the vector produced. CPI has demonstrated scale up from initial high-throughput screens at small scale all the way through to pilot scale. We have also shown that through careful manipulation of process conditions, equivalent to improved titre can be achieved at significantly reduced cost, which supports cost-effective scale up (Figure 1B) and have successfully produced multiple AAV serotypes. We are currently developing a suspension-based AAV process following our suspension scale up workflow as applied successfully to various other biopharmaceutical products (Figure 1C). 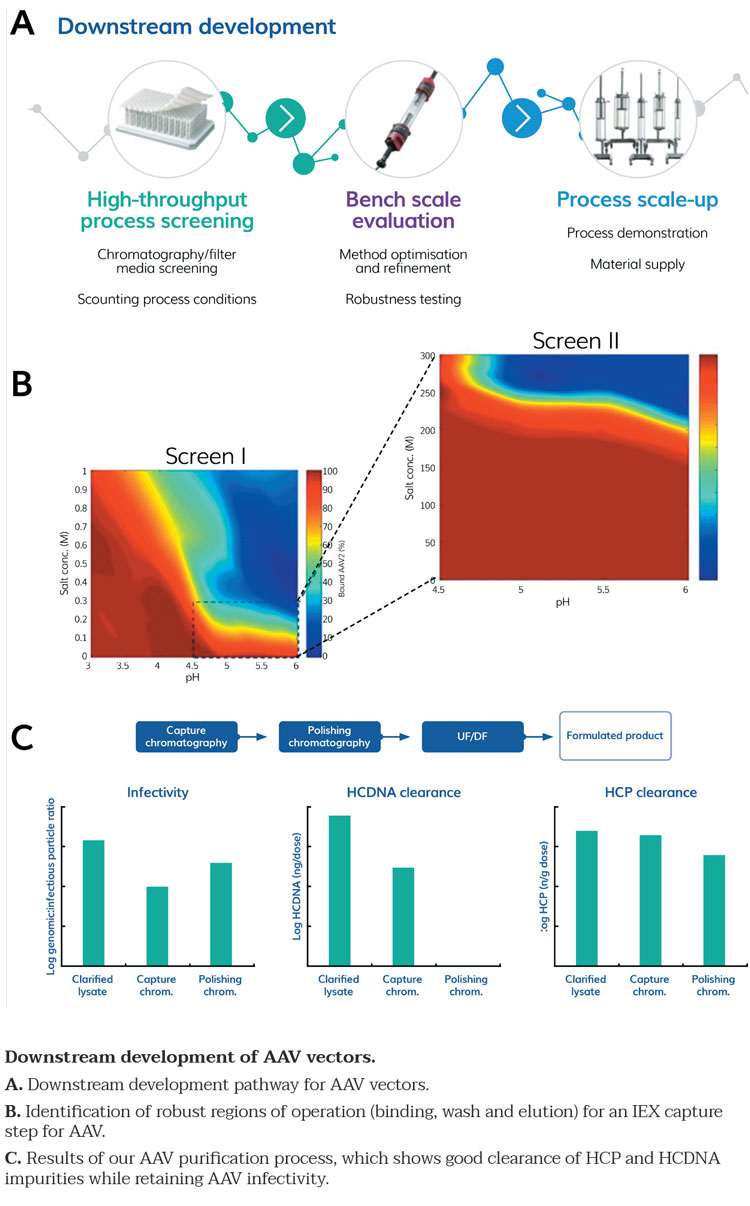 Following production of AAV particles in upstream, the AAV next needs to be purified and formulated. Typical downstream approaches for AAV have used ultracentrifugation, but given the large volumes that require processing, this approach is not sufficiently scalable. We therefore developed a robust high-throughput purification process using scaled down approaches – chromatography resin slurry plates or miniature chromatography columns (Robocolumns). A platform process developed to purify AAV particles was developed as per the process shown in Figure 2A. Processes were scouted and the robustness was tested in scale down systems (Figure 2B) prior to scale up. We confirmed the titre of the pure product and the lack of impurities (Figure 2C), in accordance with ICH guidelines. 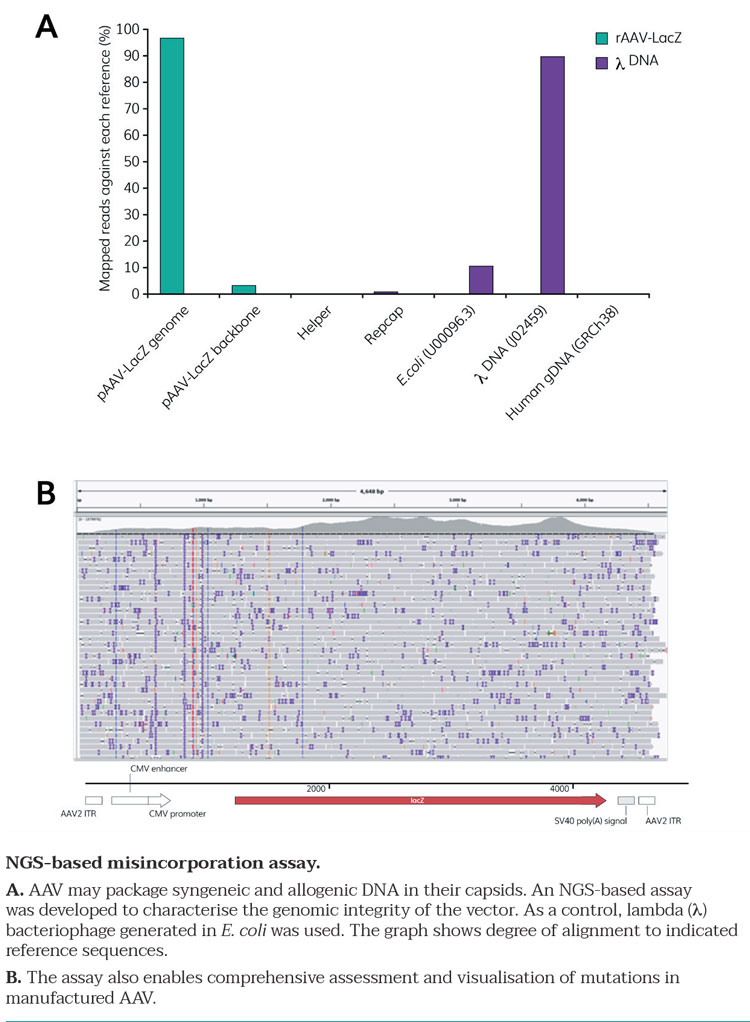 To support process development for AAV viral vectors, we have also developed a full suite of high-throughput analytical methods to address the complexity of the product, with multiple analyses necessary to be able to characterise key attributes listed in Table 1. These are all in line with ICH guidelines and include methods developed in-house specifically for CPI’s work on AAV vectors (Figure 3A and 3B).

The global population is ageing, and healthcare expenditure is predicted to reach $8.5 trillion by next year. Gene therapy offers not just a treatment of symptoms but a proper removal of the cause, thereby drastically improving the quality of lives of the patients in addition to significantly reducing the costs of healthcare. After decades of research, gene therapy has finally reached the clinics. In 2018, the market value of gene therapy was $1 billion. Based on the forecast compound annual growth rate of 36.5 percent, the market value is predicted to be worth $9 billion by 2025.2

Thus, CPI has developed unique expertise in all the main aspects of producing scalable AAV manufacturing processes (USP, DSP and analytical toolkit) through collaborative programmes with Cobra Biologics, Gyroscope Therapeutics and GE/Puridify. The organisation is in a strong position to support development of AAV therapies and has built an excellent knowledge base from which other viral vector and vaccine processes can be supported.