Researchers have developed a solid ‘cryogel’ vaccine that has been successful in combatting acute myeloid leukaemia in mice. How was this new formulation discovered and what potential does it have for cancer patients? 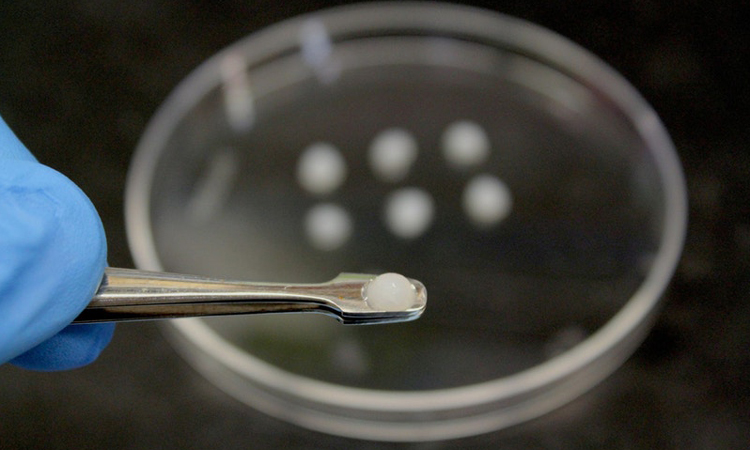 The AML vaccine is composed of a cryogel matrix that includes chemicals to attract and activate the body’s dendritic cells, which can initiate an immune response against the cancer cells and provide lasting immunity against recurrence of the disease (credit: Wyss Institute at Harvard University).

Chemotherapy has been the standard-of-care treatment for acute myeloid leukaemia (AML) for over 40 years. While it often causes the cancer to go into remission, it rarely completely eliminates the cancerous cells, leading to disease recurrence in nearly half of treated patients. Aggressive post-remission treatments, like high-dose chemotherapy or bone marrow transplants, can reduce the chance of recurrence, but many AML patients are not healthy enough to tolerate them.

A new study has presented an alternative treatment that has the potential to eliminate AML cells: an injectable, biomaterial-based vaccine that, when combined with standard chemotherapy, caused complete and lasting recovery from and immunity against the condition in mice.

Conducted by researchers from Harvard’s Wyss Institute for Biologically Inspired Engineering, John A. Paulson School of Engineering and Applied Sciences (SEAS) and Stem Cell Institute (SCI), all US, the study demonstrates the potential for a new AML vaccine formulation. The study was published in Nature Biomedical Engineering.

“We have previously developed cancer vaccines against solid tumours and we were curious to see if this technology would also be effective at treating a blood cancer like AML,” said co-first author Dr Nisarg Shah, a former Postdoctoral Fellow in the lab of Wyss Core Faculty member Dr David Mooney, who is now an Assistant Professor at the University of California, San Diego. “The promising outcomes of the combination of this vaccine with chemotherapy may translate to human vaccines that can be personalised yet offer off-the-shelf convenience.”

Unlike traditional liquid vaccines, the new drug is a tiny, disk-shaped ‘cryogel’ scaffold made primarily of two materials – polyethylene glycol and alginate – that have been cross-linked together to form a matrix. Two chemicals (GM-CSF and CpG-ODN) are embedded in the scaffold to attract the body’s dendritic cells and activate them, along with antigens specific to AML cells (either contents from dead AML cells or a peptide from the protein WT-1). The activated dendritic cells take up the antigens from the vaccine site and present them to T cells, triggering them to seek and destroy AML cells as well as remain in the body to prevent any recurrence of disease. 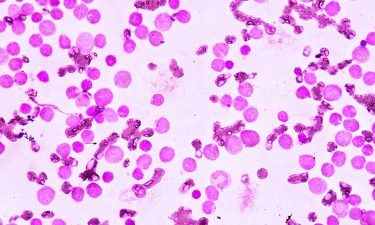 To test whether their cryogel vaccine effectively primed the immune system to attack AML cells, the team injected it under the skin of healthy mice. They observed that it resulted in a much higher number of activated T cells when either AML cell contents or WT-1 was used as the antigen, compared with mice that received the activating chemicals via a traditional vaccine injection or a ‘blank’ scaffold without any chemicals. They then challenged the mice by injecting them with WT-1-expressing AML cells to mimic the initial onset of the disease. The mice that received either the traditional vaccine or a blank scaffold succumbed to the disease within 60 days, while those that received the cryogel vaccine survived. The survivors were then re-challenged with a second dose of AML cells after 100 days and displayed no signs of disease, demonstrating that the vaccine successfully protected them against recurrence.

As the disease originates in the bone marrow and cancerous cells can ‘hide’ there to escape chemotherapy treatment, the team analysed the mice’s bone marrow. They found large numbers of active T cells and no trace of AML cells in the cryogel-vaccinated mice’s marrow. When they transplanted bone marrow from those mice into healthy mice that were then challenged with AML cells, all the transplant recipients survived, while a control group succumbed to AML within 30 days, indicating that the immune protection against the condition was sustained and transferable.

To mimic the clinical scenario of a human patient developing AML, the team injected their cryogel vaccine into mice that had AML along with the standard chemotherapy regimen that AML patients receive, which causes AML cells to die in large numbers. The activated T-cell response in mice that received the combo therapy was six times higher than in mice that received chemotherapy plus a traditional liquid vaccine, suggesting that the cryogel was a much more effective vehicle for delivering the activating chemicals to the immune system.

To test the durability of the immune response generated by the combination treatment, they harvested bone marrow from mice that took the cryogel vaccine with WT-1 peptide along with chemotherapy. This was transplanted into healthy mice that were then challenged with the cancer. None of the recipient mice developed the disease up to 14 days after transplant, indicating that the combination-treated mice did not have residual AML cells in their marrow and all the recipient mice survived a later challenge with the cells, while untreated mice died within 31 days.

However, when the researchers began to investigate the vaccine’s components, they were surprised to find that that vaccines without an AML antigen were just as effective at providing protection as vaccines containing either AML cell contents or WT-1 peptide. 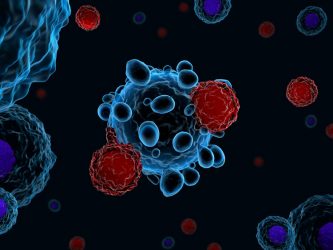 “We were definitely surprised and really did not expect this result, because we initially thought that including the antigen in the vaccine was critical. That led us down some research avenues we had not previously considered to try and understand what was going on,” said co-first author Alex Najibi, a graduate student in the Mooney lab. “We found that AML cells actually enter the cryogels over time, right where dendritic cells are already concentrated and activated. When the chemotherapy causes large numbers of AML cells to die, the dendritic cells can pick up their remains as antigens and generate a strong signal to activate T cells against AML.”

According to the researchers, work on the cryogel vaccine is continuing; the team is examining how it can be combined with sequencing technology to identify antigens that are specific to a single patient’s cancer and create a highly personalised vaccine. They are also exploring potential interactions with T cell and other adoptive transfer techniques, as well as researching antigen-free vaccines in the context of breast cancer.

“We are very excited about the performance of our AML vaccine, because it could finally provide long-term, relapse-free survival for AML patients, either to ‘clean up’ residual AML cells in the bone marrow following a stem cell transplant, or in older patients who cannot tolerate either transplants or high-dose chemotherapy,” said Mooney.