Drug Target Review rounds up some of the latest developments in materials developed for medical applications, including hydrogels, implants and more. 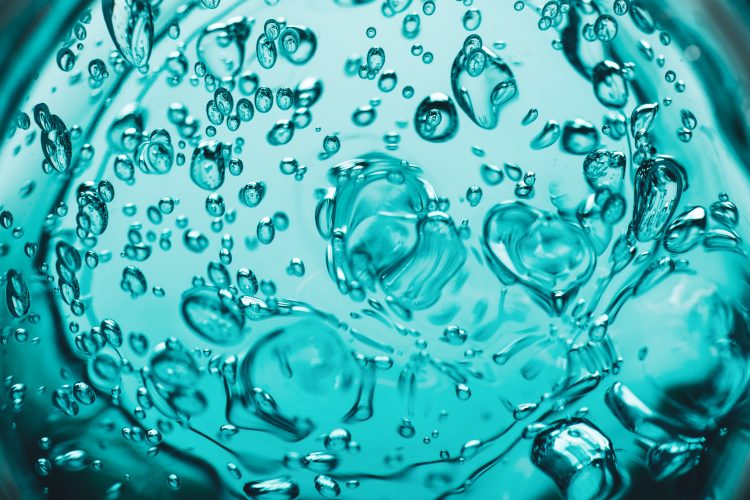 The paper, published in Nature Communications, demonstrated that the coating was able to successfully kill bacteria in low intensity, ambient light of around 300 Lux, such as that found in wards and waiting rooms, unlike its predecessors which required 10 times that level.

The new bactericidal coating is made of tiny clusters of chemically-modified gold embedded in a polymer with crystal violet – a dye known to have antibacterial and antifungal properties.

First author Dr Gi Byoung Hwang, from University College London (UCL) Chemistry, said: “Dyes such as crystal violet are promising candidates for killing bacteria and keeping surfaces sterile as they are widely used to disinfect wounds. When exposed to bright light, they create reactive oxygen species, which in turn kill bacteria by damaging their protective membranes and DNA. This is amplified when they are paired with metals such as silver, gold and zinc oxide.”

Study senior author, Ivan Parkin, UCL Chemistry Professor and Dean of UCL Mathematical & Physical Sciences added: “Other coatings have effectively killed bacteria but only after exposure to UV light, which is dangerous to humans, or very intense light sources, which are not very practical. We are surprised to see just how effective our coating is in killing both S. aureus and E. coli in ambient light, making it promising for use in a variety of healthcare environments.”

The team of chemists tested how well their coating killed S. aureus and E. coli against control coatings and under different lighting, including dark and white light conditions between 200 – 429 Lux. They found that in ambient light, a control coating of crystal violet alone in a polymer did not kill either bacteria. However, in the same lighting conditions, the bactericidal coating led to approximately 99.9 percent reduction in the growth of S. aureus after six hours and of E. coli after 24 hours.

The team discovered that their coating kills bacteria by producing hydrogen peroxide which chemically attacks the cell membrane. It therefore takes longer to work on bacteria like E. Coli that also have a cell wall. “The gold clusters in our coating are key to generating the hydrogen peroxide, through the action of light and humidity. Given the clusters contain only 25 atoms of gold, very little of this precious metal is required compared to similar coatings, making our coating attractive for wider use,” commented senior author Professor Asterios Gavriilidis, UCL Chemical Engineering.

New research suggests the properties of a biohydrogel, biomaterials composed of polymer chains dispersed in water, can be altered by the ambient temperature. The researchers suggest this insight could expand their potential uses in biomedical applications, such as in tissue repair, as surgical sealants and in three-dimensional (3D) biofabrication. 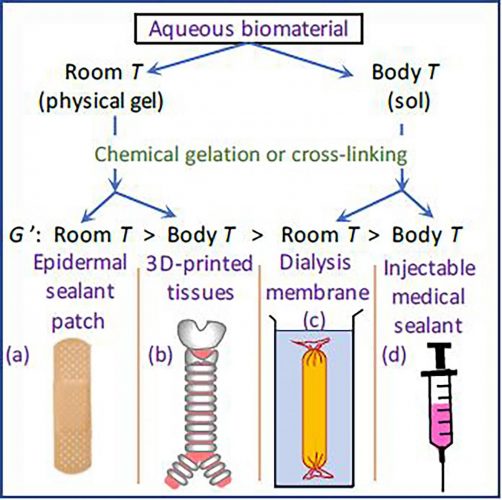 Different temperatures are used to create different products of biomaterials depending on their intended application [credit: Heon E. Park].

Hydrogels can move between a solid (gel) and liquid (sol) state depending on their temperature, which can be problematic depending on their intended use. In a paper published in Physics of Fluids, researchers in New Zealand, Canada and the US demonstrated that the temperature at which hydrogels are created can change their properties.

They found that to create robust, sticky materials, such as lung patches for punctured lungs, for use in the body, the hydrogel needs to be created at room temperature or below.

The researchers explained that temperature is also an important consideration when 3D printing biomaterials; if a bioink (hydrogel containing cells) is stored in a syringe barrel at room temperature, it will not flow smoothly through the printing nozzle and cause the printed shapes to be irregular or inconsistent.

“We have shown that the best way to engineer biomaterials that are rigid and sticky is by changing the temperature rather than by reformulating the hydrogels,” said Park.

Chondrocyte supporting hydrogel scaffolds could be the future for osteoarthritis

A novel hydrogel tissue regeneration scaffold has been developed. The researchers suggest their simplified technique could enable regenerative medicine to be used instead of joint replacement in diseases such as osteoarthritis.

A team of scientists from Tokyo University of Science, led by Professor Hidenori Otsuka, developed a novel biocompatible hydrogel to act as a structural scaffold for the growth of chondrocytes (cartilage producing cells). Their research was published in Chemistry of Materials.

By combining two different hydrogels, the peptide RADA16 and a mixture of the biopolymer chitosan (CH) and compound polyethylene glycol (PEG), the team were able to create a interpenetrating polymer network (IPN) hydrogel scaffold in simplified steps, overcoming the challenges of the typically tedious process of creating IPNs.

“Generally, the formation of IPN gels is a cytotoxic, multistep process: it involves constructing a network, followed by the addition of chemical reagents or subjecting them to external stimuli, such as temperature or changes in light irradiation, to form the other network. We wanted to create a novel scaffold using a one-step process, which could overcome the limitations of existing IPNs,” said Otsaka. “We mixed the two materials, RADA16 and CH/PEG, and found that they successfully formed heterologous IPNs. Moreover, these IPNs did not interfere with each other, as it turns out that the RADA16 networks form first, followed by the slower assembly of CH/PEG networks.”

The scientists then tested if the scaffold could support the growth of chondrocytes, finding that the cells embedded uniformly in the hydrogel, effectively generating functional cartilage tissue. Implanting human chondrocytes into the scaffold within mice led to cartilage formation over a period of eight weeks, surpassing the performance of conventional tissue scaffolds.

According to the team, their findings could potentially overcome the limitations of tissue regeneration and pave the way for autonomous cartilage generation as an alternative to artificial joints, minimising the use of invasive surgeries.

Hydrogel electrodes could be used in biomedical devices

Researchers have found that applying an adhesive layer of polyurethane to polymer hydrogel electrodes enables them to remain connected to devices, even in the moist and moving environment of the body.

…the adhesive penetrates the polymer itself, producing a tough, durable protective structure that… showed resistance to bending, twisting and folding of the materials”

Most electrodes attached to biomedical devices are made of platinum or platinum-iridium alloys. While they conduct electricity well and are durable in the body, they are stiff and can cause tissue damage and scarring. Therefore, conductive polymer hydrogels have been an attractive option for sensing and electrostimulation as they are flexible and cause minimal damage; however, their inability to remain adhered to surfaces in moist environments has prevented their use in the body.

In a paper published in Science Advances, MIT researchers demonstrated a new adhesive method that enhances the durability of conductive polymers without altering their formulation or method of production.

The method involves adding a few nanometres of polyurethane between the polymer and the substrate material. The polyurethane acts as an adhesive and enabled the hydrogels to stick to a variety of commonly used substrate materials, including glass, polyimide, indium tin oxide and gold. According to the researchers, the adhesive penetrates the polymer itself, producing a tough, durable protective structure that keeps the material in place. The bond showed resistance to bending, twisting and folding of the materials.

The researchers said other adhesive coatings could be used to form the interpenetrating networks that strengthen the bond between hydrogel and device and that the layer could be added via a range of commonly used manufacturing processes, making it easy to integrate with existing fabrication platforms.

While further testing is required for the biomedical device industry to accept that the new material is safe and stable, the authors believe this is a major advancement in the bioelectronics field.

Brain implants are an emerging technology used in treatments, such as deep brain stimulation, for Parkinson’s, epilepsy and severe depression. They are also being developed for use in regenerative therapies for patients with paralysis and locked-in syndrome.

However, implants currently on the market are made of rigid materials that can damage brain tissue and cause inflammation and scarring over time. To overcome this issue, MIT scientists worked to develop soft, flexible, rubber-like neural implants that can mould to the contours of the brain without causing damage. The result is 3D bioprintable electrodes that could be used to monitor brain activity or stimulate brain cells.

The implants detailed in the paper published in Nature Communications are made from an electrically conductive soft plastic with the viscosity of toothpaste. 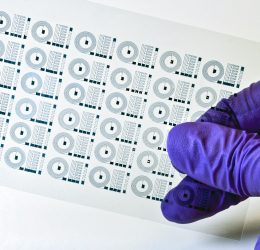 The team used poly (3,4-ethylenedioxythiophene) polystyrene sulfonate, known as PEDOT:PSS, as the base of their polymer and thickened it by first freeze-drying it to create a nanofiber sponge and then mixing the sponge with water and an organic solvent solution to create a hydrogel. They created various concentrations of nanofibers in their hydrogels and analysed the properties to find that a five to eight percent concentration was optimal for 3D printing while maintaining electrical conductivity.

One of the devices produced in the study was a rubbery electrode that they implanted into a mouse brain where it recorded the activity of a single neuron. However, according to the researchers, their printable, conductive polymer could be used in a number of electronic devices for biomedical applications, aside from brain electrodes.