What impact does disease rarity have on rare and orphan drug pricing? 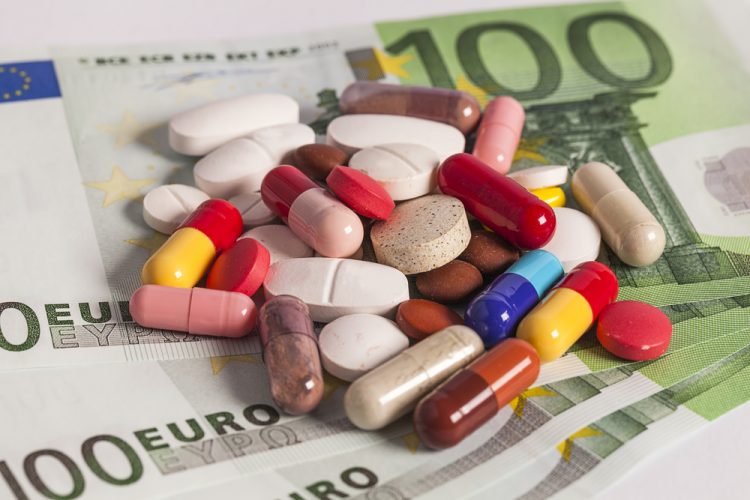 As more pharmaceutical companies develop and launch drugs to treat rare diseases, reimbursement decisions indicate that payers are looking at a range of issues, including disease prevalence, with new levels of scrutiny and that their willingness to accept high prices may be reaching its limits. There are signs that they are less willing to overlook the limitations on clinical data often associated with these drugs, negotiating rebates and setting budget limit thresholds. Payers across the globe continue to face budget challenges that new rare disease therapies might present while assessing cost against the overall goal in healthcare: to provide access to optimal treatment options to as many patients as possible. For rare disease drugs, payers must consider a range of factors including clinical benefit, high prices, disease prevalence, unmet need and often limited efficacy and safety data in their reimbursement decision-making.

In 2011, payers in Germany introduced the Arzneimittelmarkt-Neuordnungsgesetz (Act on the Reform of the Market for Medical Products, or AMNOG), a process that allows payers to assess products using evidence-based methods to compare clinical benefit against budget impact. In this process, each product evaluated is assigned an added benefit (AB) rating. Rare disease therapies with orphan drug designation are guaranteed a positive AB rating (at minimum, an unquantifiable AB rating) if annual sales remain below €50 million. In cases where drugs exceed this sales figure, they are automatically re-assessed using the AMNOG process.

German payers face uncertainties presented by rare disease therapies, including evaluating the magnitude of clinical benefit, number of patients eligible for treatment and potential budget impact. In addition, with more manufacturers investing in development of rare disease therapies and many new product launches in recent years, the value of disease rarity for payers is being spread more thinly as the sector becomes increasingly crowded.

Our team took a closer look at payer assessments of rare disease drugs to better understand the range of factors payers focus on and the level of influence each factor has on reimbursement decisions. The analysis included a review of 22 non-oncology rare disease drugs that received European Medicines Agency (EMA) approval between July 2012 and December 2019 and considered decision reports from the G-BA (Gemeinsamer Bundesausschuss – Federal Joint Committee). We focused on chronic, non-curative treatments for which payers are more likely to scrutinise average annual treatment costs (AATCs) and assessed factors such as disease prevalence rates, demonstrated added clinical benefit and anticipated budget impact. Given that some of the rare disease therapies included in this analysis have multiple indications, we focused on the first completed assessments and negotiated prices to determine AATC at that time.

Overall, we found a positive relationship between price (AATC) and prevalence (number of patients eligible for treatment) indicating AATC tends to decrease as the patient population size increases. Payers generally seemed willing to pay more for products expected to treat fewer patients. However, there were some deviations from this trendline, potentially as a result of other factors beyond prevalence or disease rarity that may influence payers’ willingness to pay, including: 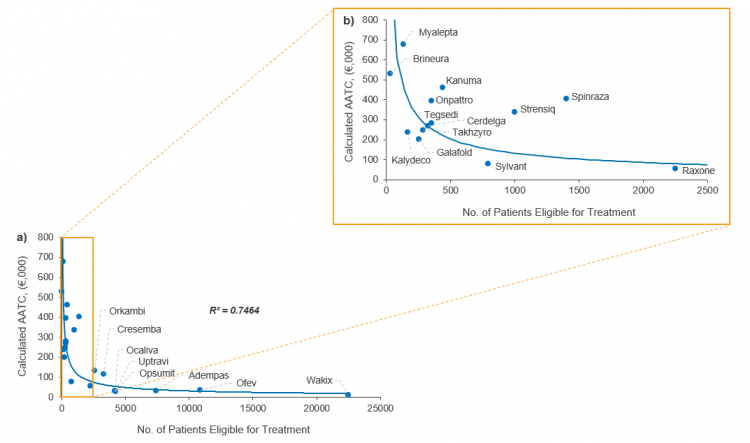 There appears to be no overall correlation between AB rating and a more favourable price relative to disease prevalence but there are some cases where an AB rating may have had a significant impact on the list price. In one example, Onpattro deviates from the trendline and achieved a considerable AB rating for the treatment of nerve damage caused by hereditary transthyretin (hATTR) amyloidosis; its competitor, Tegsedi, is on the trendline and achieved an unquantifiable AB rating. Although both drugs were assessed at the same time and have the same indication and eligible patient number, German payers granted Onpattro a higher AATC compared to Tegsedi. In another example, the AATC of Orkambi, a treatment for cystic fibrosis patients with the F508del mutation, may have been influenced by the considerable AB rating. This, in turn, may have increased willingness to pay for Orkambi over other rare disease therapies with similar patient population sizes such as Raxone, a treatment for Leber’s hereditary optic neuropathy, which received an unquantifiable AB rating.

But AB rating is not always the most significant or deciding factor in reimbursement decisions, as seen with Uptravi, a treatment for pulmonary arterial hypertension (PAH). Uptravi received an AB not proven rating and yet achieved a similar AATC compared to other available treatment options for PAH including Opsumit, which received a minor AB rating, suggesting payers considered the size of the population and comparator pricing to be important factors in addition to the AB rating. 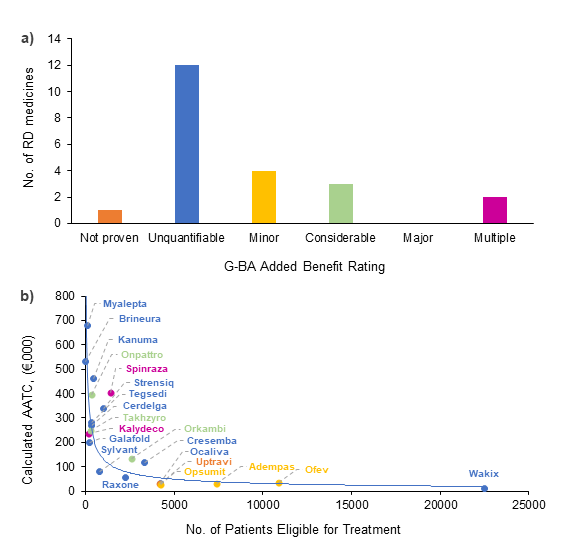 Figure 2: a) Distribution of added benefit (AB) rating*; b) Relationship between AATC and number of patients eligible for treatment in Germany with colour-coded AB rating. *for products with multiple ratings, the individual ratings are: Spinraza – Type 1 (Major), Type 2 (Considerable), Type 3 and Type 4 (Unquantifiable), Kalydeco – Ages 6-11 (Minor), Ages 12 and above (Considerable) [Source: CRA analysis].

Clinical comparators used in pivotal trials of rare disease therapies are also key variables that drive G-BA decision making and assessment of AB, ranging from single-arm trials with no comparator to active comparator trials where two comparable rare disease drugs are assessed based on data from multiple studies. Placebo-controlled trials are most commonly used in the rare disease sector given that there is often no established standard of care to serve as a comparison.

Findings indicate that the type of clinical trial comparators does not impact the ability to demonstrate an AB, with payers acknowledging rare disease unmet needs and innovation among other factors when making pricing decisions. Several rare disease drugs assessed in placebo-controlled trials were able to achieve a minor or considerable AB rating while all drugs in this analysis with active-control trials achieved unquantifiable AB ratings. The only rare disease drug to achieve a major AB rating was Spinraza for treatment of spinal muscular atrophy (SMA) type 1 following a clinical trial comparing the drug against best supportive care. 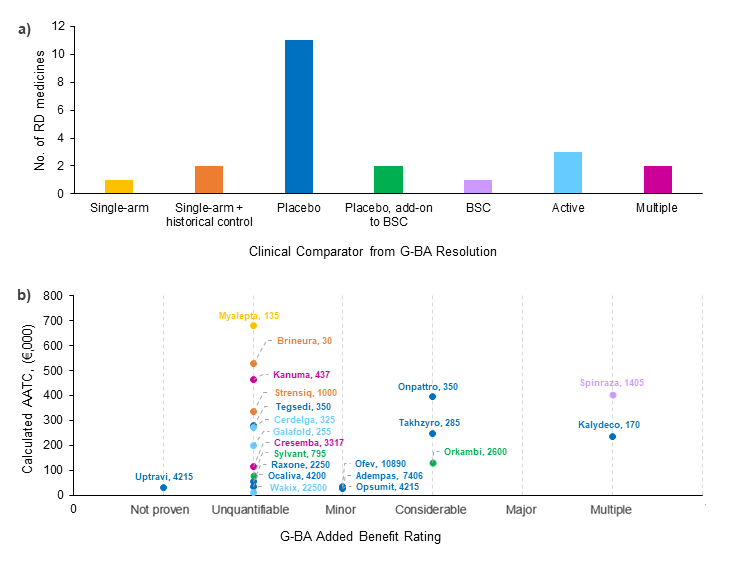 While disease rarity often plays a significant role in payer decision-making in Germany, this analysis indicates that there are a range of factors that manufacturers of rare disease therapies need to consider when preparing for potential product approval and launch. Trial comparators are important, but the quality of clinical data and the level of clinical benefit will often hold greater weight in payer assessments of AB, as shown by the variety of ratings across products with placebo-controlled trials. AB rating may provide some initial negotiating power to manufacturers, but there also needs to be a clear understanding of the patient population size at the local level and how treatment uptake is expected to progress, both of which will likely impact payer willingness to pay for rare disease therapies. To prepare for pricing negotiations, manufacturers should conduct an analysis of current treatment options (including best supportive care [BSC]) and their associated costs; the patient experience including symptoms, daily challenges and disease burden; anticipated patient uptake and budget impact based on forecasting models; and available clinical data to effectively negotiate an appropriate price.

Bhavesh Patel is a Principal in the Life Sciences Practice at CRA and directs CRA’s Rare Disease Issues Leadership Platform. He has experience in global pricing and market access, value proposition, commercial strategy and launch readiness.

Cécile Matthews is a Vice President in the Life Sciences Practice at CRA with 20 years of experience in strategy consulting for the pharmaceutical industry. Her areas of expertise include pricing, reimbursement and market access globally.

Owen Male is an Associate in the Life Sciences Practice at CRA. He has worked on numerous strategy and policy consulting projects focused on topics including pricing and market access, stakeholder engagement, commercial strategy, due diligence and policy positioning.

The views expressed herein are the authors’ and not those of Charles River Associates (CRA) or any of the organisations with which the authors are affiliated.

The analysis is available here.