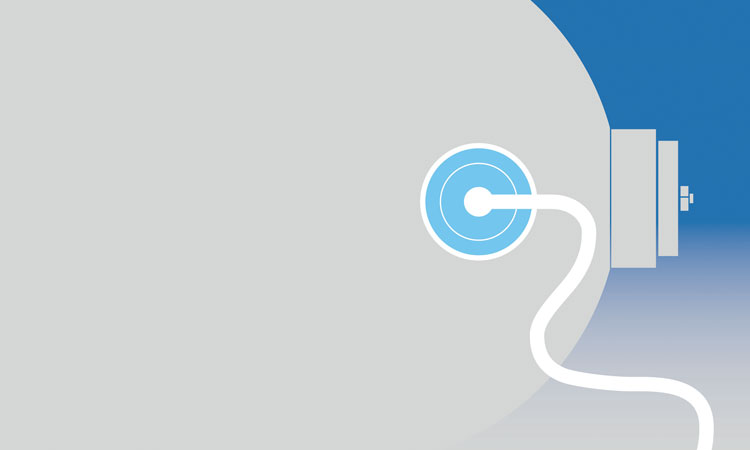 Pressure vessels must undergo periodic routine inspections, during which the pressure equipment is tested for leaks, potential cracking and progressive corrosion. Conventional leak-tightness tests usually involve filling the vessels with water; however, the filling and subsequent laborious cleaning and drying of the vessels results in long downtimes. Pharmaceutical production introduces further complex requirements; compressed air purity standards in this sector are particularly rigorous and, after testing, the system must be left completely free from moisture, which would otherwise cause serious problems in the production process. These difficulties are eliminated at a stroke using acoustic emission testing (AET) instead, as this method can be performed as gas pressure testing, thus minimising downtimes.

No need for a shutdown

Alternative methods based on testing concepts may be used for pressure equipment. AET is one such form of non-destructive testing (NDT). A pre-requisite for the use of such methods is a testing concept submitted by the employer and confirmed by an approved monitoring body. In terms of system safety, it must provide the same information as traditional tests. Based on this concept, system and installation elements can be tested using NDT methods with no need for shutdown. In line with the testing concept, AET can even replace inspection of the interior of the pressure vessel as part of interior testing.

To perform acoustic emission testing, piezoelectrical sensors are attached to the vessel wall prior to testing. Magnetic sensor holders are used on pressure vessels made from ferromagnetic materials. Coupling agent is applied between the sensor and the metallic surface of the vessel to create a reliable bond for transmitting the acoustic waves. As AET requires the application of pressure during measurement, the pressure equipment is subjected to continuously rising pressure while being monitored by the sensors. The testing pressure PTAET must be set to a minimum of 1.1 times the maximum operating pressure POP during normal operations. This value applies to the use of AET in gas pressure testing to replace interior inspection during interior testing.

If the material contains active faults such as cracks, the rising pressure triggers their propagation (crack surface friction). The sudden motion of this slight crack propagation causes mechanical displacements in the surrounding material, which is set in vibration, causing a transient elastic acoustic wave to spread from its source. This wave is picked up by the sensors and their piezoelectric crystals convert the mechanical waves into electrical signals that are recorded by a test computer, presented graphically in a digital twin and, finally, interpreted and evaluated by experienced test engineers. This method enables any changes to be detected in the material structure before they can become critical. AET often enables far more accurate statements to be made about the condition of the pressure equipment than would be possible from conventional visual or pressure testing. This also applies to the evaluation of non‑critical inhomogeneities or micro-cracking that do not propagate in operation and can thus be left unchanged.

As AET records faults as they develop or propagate, the method delivers results in real time and can also be used to monitor gas pressure testing as an occupational safety measure. As a further advantage, only a small number of sensors in fixed positions are needed to test or monitor 100 percent of a structure. Therefore, AET enables large-scale vessels and equipment with complex geometries, poorly accessible areas or fixtures and installations to be tested easily and safely.

Acoustic emission (AE) sources are easily detected and can be precisely localised. In evaluation, the signals are clustered into local accumulations. The level of activity in a specific area is shown by the number of detected signals in a cluster. A proven procedure in data analysis is to classify the detected signals and clusters into three groups depending on their AE activity and AE intensity (see Table 1). This provides a solid basis for planning the further progress of testing and for taking any necessary actions.

The following case study demonstrates how AET is conducted. TÜV SÜD was commissioned by pharmaceutical company Hexal AG to perform routine testing of a pressure vessel used for producing compressed air for manufacturing processes. The pressure vessel was manufactured in 1991 and has a capacity of 3,000 litres. It is made from heat-resistant boiler steel (P 235 GH) and has longitudinal submerged-arc-welded seams on both sides. The permissible operating pressure (POP) is 11bar. 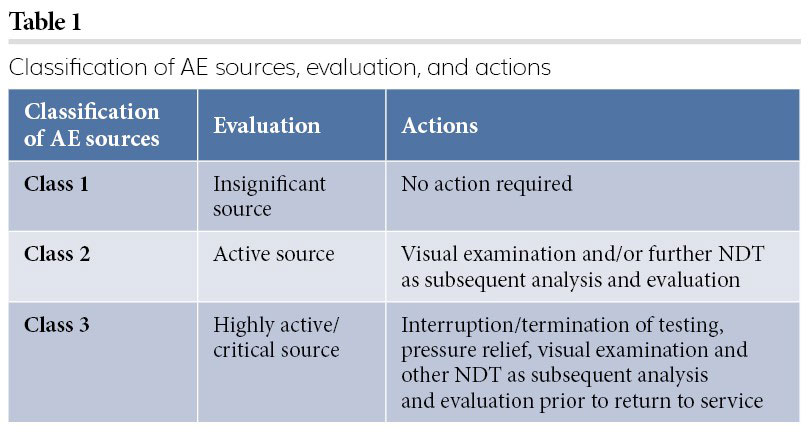 As pharmaceutical production operations at Hexal take place in three shifts, downtime during integrity testing of the pressure vessel had to be kept to the absolute minimum. An initial visual inspection of the vessel interior was conducted even though the planned acoustic emission tests rendered this unnecessary; the vessel interior was easily accessible through an existing manhole, so it was decided to perform the visual inspection. No significant damage or faults were found. In addition to the interior inspection of the tank walls, ultrasound wall thickness measurement was performed and showed no irregularities.

How to optimise production by using the correct tablet tooling

The quest for efficiency – moving towards continuous processing

The sensors were then applied to the vessel. A total of eight sensors were used – enough to inspect the entire surface of the vessel using AET. The test was conducted as a hardness test with gas pressure. The necessary testing pressure was obtained using an external compressor. The sensor signals were recorded and transmitted to the receiver unit in real time for evaluation. When testing pressure PTAET = 12.1bar was reached, a holding time of 15 minutes followed, after which the sensors were removed, pressure was relieved and the vessel was promptly returned to service. AET detected AE sources in a small number of areas. Upon classification, all areas were shown to fall into Class 1 and thus did not affect the stability of the pressure vessel. The vessel was certified for continued operation until the next routine inspection.

AET has benefitted enormously from the giant leaps in computer performance over recent years. With faster processors and user-friendly software, several hundred sensor readings per second can be recorded in real time. The speed with which testing equipment can detect and analyse potential irregularities or anomalies has increased 1,000-fold.

Given the high level of maturity and real-time capability of AET, the method is also suitable for monitoring systems and installations during operation as a complement to the tests and inspections required by law. In addition to delivering valuable information for predictive maintenance scheduling, the information collected during testing can be transmitted via a data network (online monitoring), which can also be set up as a cloud solution. NDT can also be complemented or supplemented with permanent monitoring – separate ultrasound measurements, which provide continuous information about factors such as vessel wall thickness.

After successively gaining bachelor’s degrees in business administration and industrial engineering, the latter at Hamburg University of Applied Sciences for Distance Learning (HFH), Oliver Großgart joined TÜV SÜD Industrie Service GmbH in 2016 and qualified as an officially authorised plant safety engineering expert in the Plant Safety department. Parallel to his work at TÜV SÜD, Oliver completed a master’s degree in Industrial Engineering at HFH, graduating as Master of Engineering in 2020. One of his areas of expertise is AET.