Expecting the unexpected in drug formulations

The increasing complexity of formulations and active biological products raises new challenges for pre-filled syringe development. James Mellman, Device Manager at Novartis, speaks to Nikki Withers about the challenges of selecting the right primary packaging for injectable formulations and how he has learnt to expect the unexpected. 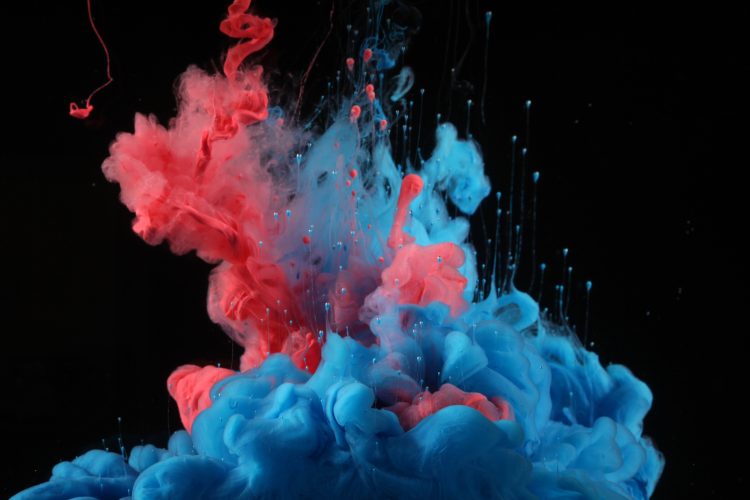 Developing a successful combination product – a medicinal product combined with a delivery system – requires not only an understanding of the design parameters of the system, but also compatibility between the system and the formulation. “It is like a marriage between the container system and the drug product,” explains Mellman. “If it is stable and works well, it will have a long, fruitful commercial life.” Mellman has worked on a multitude of injection device platforms including pre-filled syringes, needle safety devices, auto injectors and patch injectors. His main responsibilities at Novartis include developing primary packaging systems for combination products. “If you don’t understand the delivery system in combination with the drug product in advance, you risk a delay to market,” he explains, before providing a real-life example of a time when his team experienced an unanticipated incompatible system.

“We had a product, a monoclonal antibody, and the commercial requirement was to put it into a disposable autoinjector containing a pre-filled syringe for home-use,” he says. “The issue we faced was that the injection time was out of specification during stability testing (Figure 1). “Everything was great for the first year, but as the product entered the second year, injection times increased, which is something we hadn’t anticipated. When we examined this further, we realised that the silicone was doing a disappearing act on us. It was migrating away from the wall of the syringe over time (Figure 2). This was something we had never seen before, so it was quite striking.” 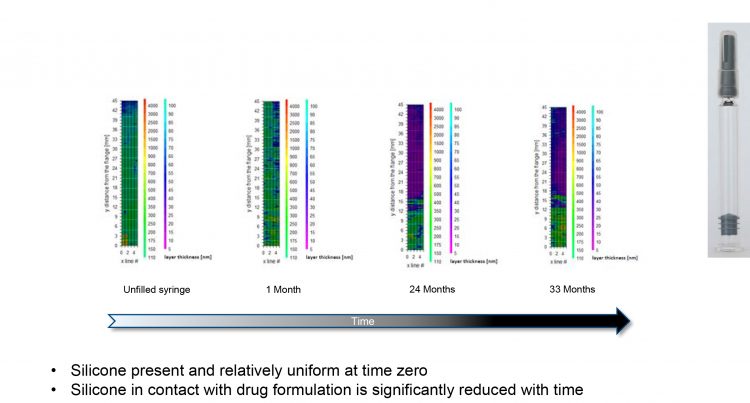 The team soon realised that these changes were long term, leading to an unacceptable injection time. “This meant we had to go back to the drawing board,” says Mellman. “We had to figure out what to do because the product was going to be delayed to market. It emphasised that we needed to find a more suitable primary packaging for this drug product.” Reflecting on this example, Mellman stresses that understanding the drug–container compatibility as an input to the delivery system is critical. “If you don’t have a compatible system with your primary packaging and formulation, you will not have a product that can be delivered.”

Mellman explains that the primary packaging acts as the containment system for the formulation of a combination product and is essential for maintaining the quality attributes of the drug product over its shelf life. Key considerations for successful combination product development include product-package 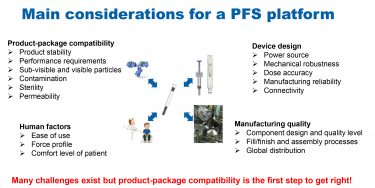 compatibility, device design, human factors, and manufacturing quality (Figure 3). “Product–package compatibility is key for product stability and the performance requirements of the overall delivery system,” he explains, emphasising that this is the first step to success. Sub-visible and visible particles must also be monitored, as well as contaminants from the primary packaging.

When discerning a suitable device design, he advises that it is of utmost importance to deliver the full dose at any time during the shelf life to match the label claim. Manufacturing quality must also be controlled, which includes the supply chain as well as their own fill and finish and assembly processes. Finally, ease of use and comfort for the user must be ensured. “There are a multitude of challenges that exist,” he says.

Added to this are the regulations associated with delivery devices, and these differ slightly between the US and the European markets. In the US, drug products combined with a device are called combination products and are governed by the FDA combination product legislation 21 CFR Part 4. In the EU they are known as either medical devices or medicinal products and are currently regulated by the Medical Device Directive (MDD), which will change to the Medical Device Regulation (MDR) in 2020 and be more similar to US regulations. “There are inherent differences between the two market’s regulations, such as only one agency reviews the product in the US, ie, the FDA, and notified bodies will be used in Europe to review the device part of a single integral product, while EMEA will review the medicinal part. In any case, we work to be compliant in any market our product is marketed.” says Mellman.

The increasing complexity of formulations and active biological products is proving to be a challenge with respect to developing primary packaging for injectables. Historically, pharmaceutical packaging was developed for small molecules, and these molecules do not behave the same as biologics or larger complex molecules. “There is a lot of added complexity around what we need to deliver now,” says Mellman. “Some of the things that worked in the past are being tried today but cannot be applied to biologics.”

Indeed, drug products are increasingly being delivered with monoclonal antibodies, and there are therapeutic peptides and proteins, antibody drug conjugates (ADCs), CAR T-cell therapy, protein multimers and adeno-associated viruses, which all present their own formulation and delivery challenges. “The formulators have to get it right, but we also have our own challenges in the delivery system,” says Mellman. “These formulations are not necessarily going to fit into a 1ml pre-filled syringe. For example, adeno-associated viruses are frozen in a vial until use and may only need to be delivered in a 20 or 30μl capacity to a deep tissue, which requires a different delivery system than, for example, an autoinjector that injects into subcutaneous tissue.”

Other formulation challenges include excipient effects, drug product concentration, and sensitivity to primary packaging contact surfaces over time. “Excipients can interact with silicone or other types of primary packaging, and it is not always understood what the contribution of small molecules or excipient effects will be on contact surfaces over time,” says Mellman. “Some molecules may interact with silicone on the glass barrel and make it more soluble in water-based solutions, so the silicone layer can erode over time. Even polysorbate may break down over time and offer less protection to the protein. A number of potential interactions are possible.” To address this, companies may need to move towards state-of-the-art containment systems and develop their knowledge. One way to do this is by screening different packaging systems to see what does and does not work. “If we rely on things that have worked in the past and not judiciously screen, we may end up with failure in product development, which sets us back some time,” says Mellman.

Ideally, he would like to use technology to develop relevant models to predict some of these complex reactions between formulas and the containment system, rather than studying one drug product or one containment system at a time. “In a sense it seems simple, but in reality, the process doesn’t involve a single group of people. Working in combination products, I need to straddle both worlds – the formulation world and the delivery system world, in which the container lies between.” Current commercial options for primary packaging can be seen in Figure 4. “These are what we can readily buy off the shelf,” explains Mellman. “These are the tools in my toolbox. The challenge with new formulations is to work out which will work – and if they don’t work for a formulation, why that is.”

Shashank Jain on formulation for drug delivery via the skin

Mellman concludes that anticipating product–packaging interactions will be key to moving forward. “Expect the unexpected,” he says. “If we start to understand the complexities of formulations and their interactions with delivery systems, we’ll have a win-win situation, with reduced regulatory risks and a faster time to patients.”

JAMES MELLMAN is a device manager for Novartis in Basel, Switzerland. His main responsibilities include developing primary packaging systems for combination products and supporting new technologies. He has worked on a multitude of injection device platforms including pre-filled syringes, needle safety devices, auto injectors and patch injectors. He has also helped to build and implement a renovated CCIT strategy for the Novartis Group. Before Novartis, James worked for Pfizer in their Devices Centre of Excellence in Cambridge, UK and Danone in their Advanced Medical Nutrition Division in Amsterdam, NL. He received his PhD from the University of Florida in Materials Science and Engineering in 2007 specialising in biomaterials. 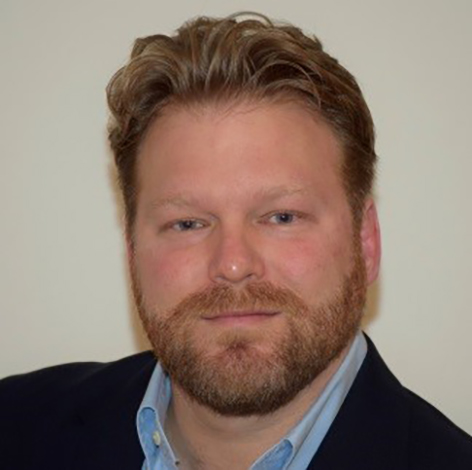 One response to “Expecting the unexpected in drug formulations”