Scientists have developed a highly sensitive material that can analyse multiple environmental parameters simultaneously, which could be used in drug delivery. 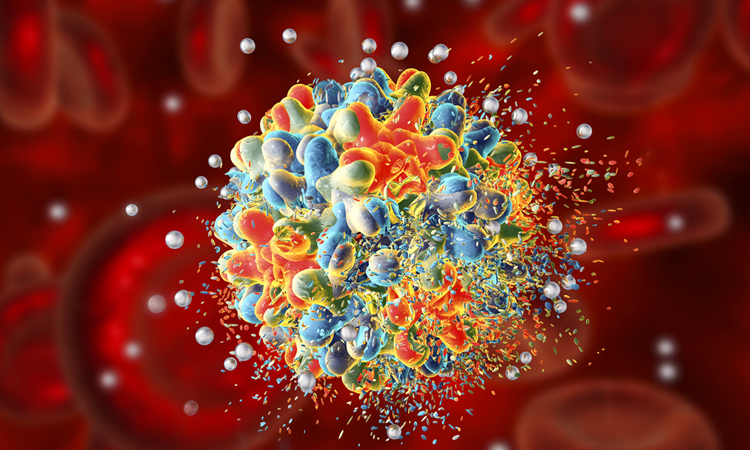 Russian scientists report that they have developed a smart material with unique properties, which holds promise for express DNA analysis and next-generation drug delivery against cancer and other serious diseases.

The team, from the Moscow Institute of Physics and Technology (MIPT) and Prokhorov General Physics Institute of the Russian Academy of Sciences (RAS), created a new material intended for drug delivery, which is capable of analysing multiple environment parameters at once, seeking out drug targets with precision.

The material is characterised by a supersensitivity to DNA signals. According to the researchers, it exhibits a higher sensitivity than the majority of currently available express DNA assays.

In the study, one end of a single-stranded DNA molecule was pinned to a nanoparticle. The molecule had no hairpins (double-stranded segments where part of the chain sticks to itself). The team then attached a small molecular receptor to the other end of the DNA chain. Contrary to expectations, the receptor did not bind to its target. The scientists hypothesised that single-stranded DNA might stick to the nanoparticle and coil up, hiding the receptor beneath it on the particle’s surface.

The team found their hypothesis was correct when they added complementary single strands of DNA to the particle. The receptor instantly became active, binding to its target, as the bonds between the complementary nucleotides caused the DNA strands to form a rigid double helix, or duplex. The strand thus uncoiled, exposing the receptor for target binding.

The researchers demonstrated that their agents were capable of detecting DNA concentrations as low as 30 femtomoles per litre, without DNA and/or signal amplification. The study’s co-author Elizaveta Mochalova, a doctoral student at MIPT, added: “We showed the sensitivity to be so high with a quite simple lateral flow assay, which is widely used in pregnancy tests. Unlike the existing DNA assays, such tests can be performed outside a clean laboratory setting and require no advanced equipment.”

The authors of the paper have also showed the technology to be applicable to the design of smart nanoagents that would recognise cancer cells based on the concentration of small DNA in their microenvironment.

Principal investigator and head of MIPT’s Nanobiotechnology Lab Maxim Nikitin commented: “Interestingly, the smaller the length of the nucleic acid to be detected, the more competitive our technology becomes. We can fabricate ultrasensitive agents controlled by well-studied small RNAs that are 17 to 25 bases long. However, if we take sequences that are less than 10 nucleotides long, there are simply no technologies with comparable sensitivity.

“What is even more exciting is that our method enables probing the microenvironment of cells to determine whether shorter small RNAs are useful disease markers rather than the meaningless compounds they are commonly held to be due to the difficulties in their detection.”

The newly developed technology offers prospects for genomics, both in terms of express point-of-care DNA assays and for developing next-generation therapeutic nanomaterials. It could be used to deliver drugs only to cells with a particular microenvironment genetic profile, the reseachers conclude.