Posted: 4 May 2021 | Hannah Balfour (European Pharmaceutical Review) | No comments yet

Researchers have developed a new generation of microneedle technology which allows for the intradermal delivery of living cells in a minimally invasive manner. 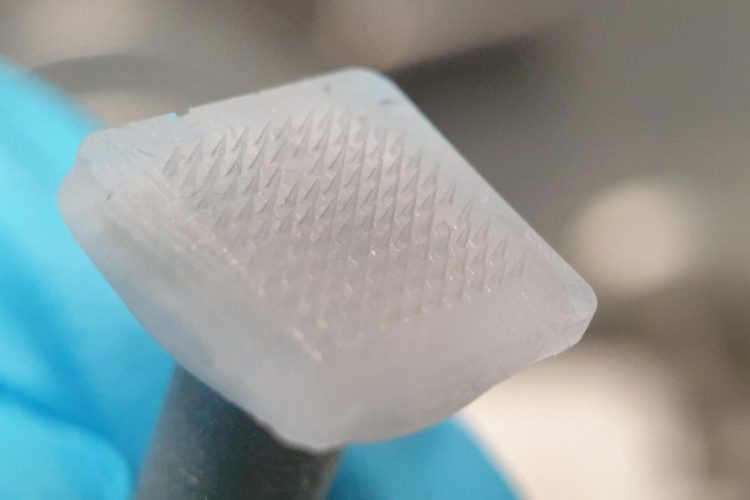 In a pre-clinical proof-of-concept study, cellular cancer immunotherapy delivered via the cryomicroneedle patch was found to be more effective than the same cells delivered by intravenous and subcutaneous injections.

In the study, led by Dr Xu Chenjie, Associate Professor at the Department of Biomedical Engineering (BME) at the City University of Hong Kong (CityU) and published in Nature Biomedical Engineering, the team demonstrated that using their cryomicroneedle technology to vaccinate mice with ovalbumin-pulsed dendritic cells elicited robust immune responses against subcutaneous melanoma tumours.

They reported that the cryomicroneedle delivery system elicited higher antigen-specific immune responses and led to slower tumour growth than intravenous and subcutaneous injections of the cells in mice. Thus, they concluded that biocompatible cryomicroneedles may facilitate minimally invasive cell delivery for a range of therapeutic indications.

Cryomicroneedles are icy microneedles shorter than one millimetre that can deliver therapeutic cells into the skin layers. They are formed on a skin-like patch base that can load, store and intradermally deliver living mammalian cells.

Despite their promise in a range of previously intractable disease indications, including cancers, cell therapies have several limitations that are yet to be solved. One of the primary limitations, according to Dr Chenjie, is the methods in which they must be delivered. He noted that the cells are currently delivered by either surgical grafts or bolus injection which are invasive, painful, complicated, poorly efficient and bring the risk of infection. Additionally, he said that they require experienced professionals to implement and the current solution-like formulations of cell therapeutics can be hard to store and transport.

To combat this problem, Dr Chenjie and his team at CityU developed cryomicroneedles that carry and deliver living cells into the skin. When the patch is placed on the skin, the microneedles penetrate through it, detach from the patch base and then melt. In this process, the therapeutic cells loaded onto the patch are released and migrate and proliferate inside the skin. Additionally, according to the team, the device can be stored for months in refrigerators. All these factors make it easy to transport and deploy, they said.

Dr Chenjie concluded: “The application of our device is not limited to the delivery of cells. This device can also package, store and deliver other types of bioactive therapeutic agents, such as proteins, peptides, mRNA, DNA and vaccines. I hope this device offers an easy-to-use and effective alternative method for the delivery of therapeutics in clinics.”