A new paper reveals how combining flow cytometry with other analytical techniques can provide a wealth of information on bacterial viability and thus enhance sterilisation processes. 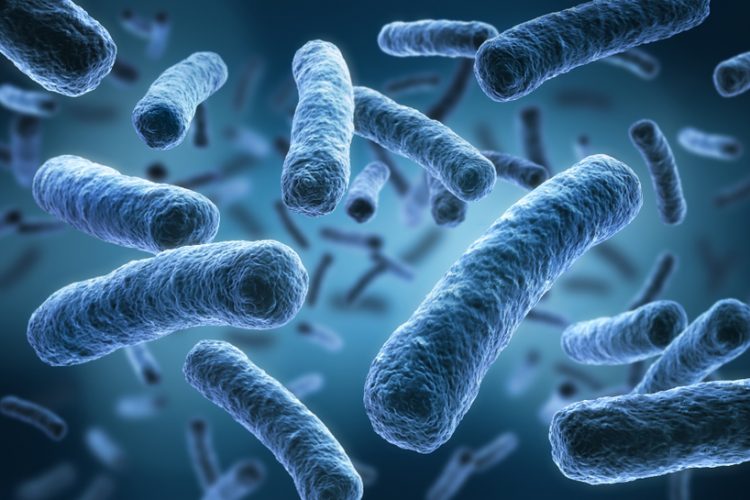 In a paper published recently in the Journal of Applied Microbiology, Brian McEvoy, Mark Lynch and Neil Rowan outlined how flow cytometry can be used to overcome existing limitations in conventional sterilisation microbiology techniques and may be employed to aid in the improvement of decontamination and sterilisation processes.

According to McEvoy, et al., one of the primary advantages of flow cytometry, when combined with fluorescent probes and dyes, is that it can be used to detect intermediate states between viable and dead bacteria, such as those that are stressed or injured. This sub-lethal state or viable but non-culturable organisms are difficult to detect with existing culture/plating methods. They wrote that flow cytometry data can reflect the differing properties of viability, such as the extent of cell membrane integrity, functionality of membrane potential and presence of intracellular enzyme activity/metabolism.

The two examples in which they said the ability to detect viable but non-culturable organisms was key were in Massicotte et al.’s work in 2017, where flow cytometry was compared to traditional culture techniques and it was found that some organisms, such as Enterococcus faecalis, in a sub-lethal state had the potential to provide a ‘biocharge of bacteria’ for future healthcare-associated infections or food poisoning. The second example was in their work on sterilisation using vapourised hydrogen peroxide (VH2O2), in which they found a traditional technique showed no growth and thus no useful information, where flow cytometry provided “a rich picture of information regarding cell numbers, viability and damage”. They stated that flow cytometry’s ability to provide information on the cellular location of lethality of VH2O2 is an important aspect of understanding sterilisation kinetics, which traditional cell culture techniques simply cannot inform. 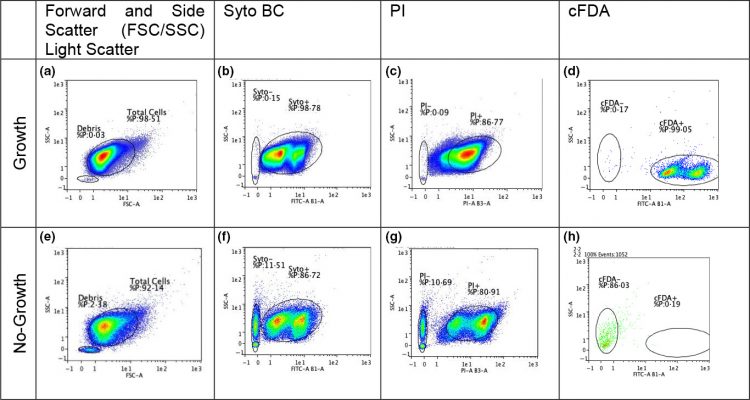 Flow cytometry of Geobacillus stearothermophilus biological indicators treated with vapourised hydrogen peroxide and incubated in Tryptic Soy Broth (TSB). Plots (a–d) are of from TSB tubes where growth was observed after 24 hours. Plots (e–h) are from TSB tubes where no growth was observed after 48 hours [Credit: McEvoy et al., 2021]. NB: Propidium iodide (PI) is a fluorescent dye for detection of dead cells; SYTO BC is a fluorescent probe for DNA and RNA; and Carboxfluorescein diacetate (cFDA) is a viability stain.

They also wrote that flow cytometry becomes even more useful for informing the effect of sterilants at a cellular level when combined with other investigative techniques, including Raman spectroscopy, multi-omics (transcriptomics, proteomics and metabolomics), scanning electron microscopy (SEM), Matrix-assisted laser desorption/ionization-time of flight (MALDI-TOF) mass spectrometry (MS) and quantitative polymerase chain reaction (PCR). In addition, the authors described how, in conjunction with such techniques, flow cytometry can be used in real-time to discern microbial homogeneity in different cell populations, allowing scientists to monitor, profile and investigate changes in microbial ecosystems.

McEvoy, et al. concluded that, to deliver more precise and efficient sterilisation processes, scientists must understand inactivation better. Adding that flow cytometry can overcome the inherent limitations of conventional sterilisation microbiology methods, such as their inability to detect sub-lethal pathogens or those that are viable or non-culturable, to do so.

“The use of [flow cytometry] FCM multi-parameter analysis using multiple fluorescent probes and alternative methods helps provide a rich picture of the ‘vitality’ states in heterogenous populations, and such a picture can potentially help inform the inactivation kinetics observed with VH2O2 treatment,” they wrote, adding that with careful design and appropriate combinations of complimentary technologies, “flow cytometry may be employed to further inform sterilisation microbiology and ultimately aid the improvement of decontamination and sterilisation processes”.

Should environmental isolates be used in pharmaceutical microbiology?