A new microfluidics tool, the Dynamic Sampling Platform, could improve biomanufacturing of cell therapies by reducing the cost of analysing bioreactor contents. 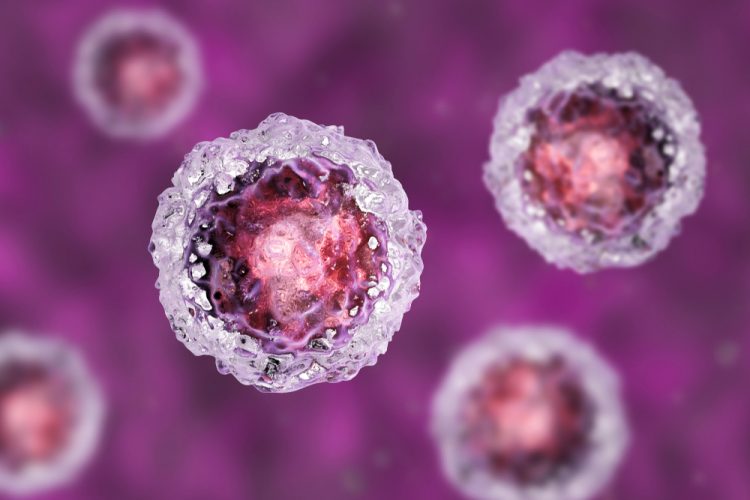 Researchers at the Georgia Institute of Technology (Georgia Tech) have developed an analytical tool for the real-time analysis of cells as they are modified and grown for treatment in a bioreactor, which they believe will improve the biomanufacturing process of advanced cell-based therapies.

The Dynamic Sampling Platform was built to overcome a hurdle to the widespread adoption of cell therapies; that monitoring biomanufacturing is a time-consuming, labour-intensive and expensive process that therefore results in hugely expensive products.

According to the developers, a team led by principal investigator Andrei Fedorov, professor in the George W Woodruff School of Mechanical Engineering and a member of the Petit Institute for Bioengineering and Bioscience at Georgia Tech, by providing greater insight into cell behaviour and the biochemical information needed for process control, their Dynamic Sampling Platform may lower the cost of cell-based therapies, making them available for a broader population of patients.

“The biomanufacturing process requires control of product safety and therapeutic potency… But there is a catch – it is very expensive,” Fedorov commented. According to the team, currently approved cell therapy products range in price from $500,000 to $2 million per treatment with production driving up the cost.

He explained that one of the main concerns is that critical quality attributes correlating to therapeutic function, performance and potency and the critical process parameters that impact quality throughout cell therapy manufacturing are largely unknown. As a result, during manufacturing, Fedorov said scientists “do not really know if the cells have maintained their therapeutic potency”. He added: “you are almost at the mercy of luck, because the ability to fully monitor a cell’s state as it transitions through the entire process is lacking.” Moreover, the absence of suitable process analysis tools, he said, is a major bottleneck to mass-market entry for these therapeutics and represents a significant gap in the biomanufacturing process.

To overcome this Fedorov et al. developed the Dynamic Sampling Platform; an integrated microfluidic platform about the size of a thumbnail to analyse, in-line, a small number of cells using direct infusion nano-electrospray ionisation mass spectrometry.

Biomanufacturing of cell therapies requires the reliable and reproducible growth of cells and stringent quality control practices, including vigilant monitoring and analysis of the contents of the bioreactor during bioproduction. According to Austin Culberson, lead author of the study and a PhD student in Fedorov’s lab, the current workflows for such analyses are very manual and time-consuming. 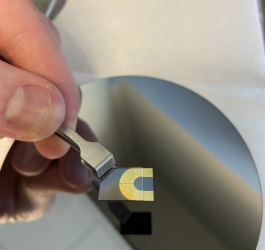 The tiny cell processing device has a channel as thin as a human hair in which cells flow through. They are captured by the cell immobilisation features, rinsed and then lysed by applying electrical pulses. The gold on top of the device are integrated electrodes that line the channel. These electrodes apply the pulses needed for lysis. After lysis, the biochemicals flow out of the device and into the mass spectrometer for analysis [Credit: Austin Culberson].

To overcome this issue, Fedorov’s former PhD student Mason Chilmonczyk, now a postdoctoral researcher in the lab, developed the first-generation Dynamic Sampling Platform, a microfabricated device that processes samples of the media – the broth of vitamins and growth factors contained in the bioreactor. Culberson furthered this research by creating a micro-sized cell processing device that takes in about 100 cells from the bioreactor and prepares them for analysis by rinsing the broth and lysing the cells. The resulting biochemicals are then sprayed into a mass spectrometer for analysis. Combined, these technologies allow researchers to probe the chemical activity of cells, as well as analyse the nutrient-rich broth containing cell-secreted biomarkers.

According to Culberson, the result is a tool that provides much broader and deeper insight into the behaviour and health of cells in the bioreactor, and that, by fully automating the process, automated, real-time analysis capabilities could guide and track cell growth.

Fedorov added that the information will not only enable them to assess cell growth trajectories, determining if cells are differentiating into the desired cell type or developing the capability to fight disease, but also assess their potential potency and safety.

The authors concluded that, by providing rapid, high-throughput analyses of the intracellular state, the Dynamic Sampling Platform enables untargeted discovery of critical quality attributes and their real-time in-process monitoring.

Chilmonczyk and Fedorov are currently in the process of commercialising the technology.

The paper was published in Lab on a Chip.

Radionuclide therapy a promising option to treat HER2 breast cancer