Posted: 16 May 2022 | Hannah Balfour (European Pharmaceutical Review) | No comments yet 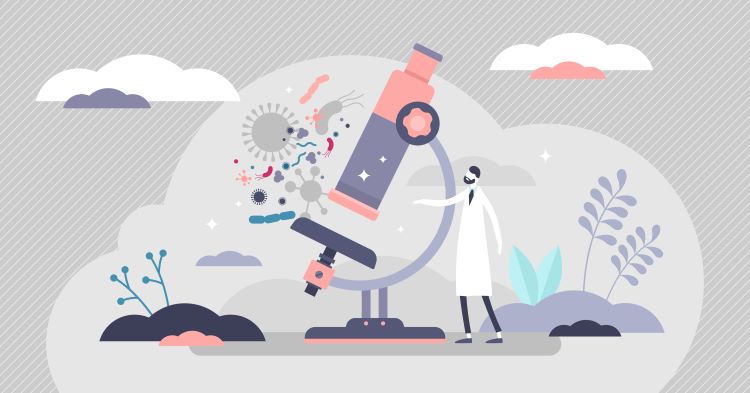 According to scientists, a novel terahertz (THz) near-field microscopy technique “will play a crucial role in THz applications, such as biomedical sensing and chemical inspection”.

THz imaging technology has attracted considerable attention as a novel far-infrared inspection method in recent years. THz radiation has been shown to enable the differentiation of normal and diseased tissues, as well as distinguish between different chemicals. Yet certain limitations have hindered progress in implementing THz near-field microscopy in chemical inspection and life sciences research.

One challenge is that the resolution of THz imaging is always limited due to its long wavelength. This has been overcome by introducing optical near-field techniques such as air-plasmas as emitters or detectors of THz. Unfortunately, though air-plasmas greatly enhance resolution, at the close proximity required for these effects, soft or liquid materials – such as samples for biomedical sensing and chemical inspection – can be damaged. Moreover, these kinds of samples may contaminate the THz source or detector.

In a paper published in Light: Science & Applications, scientists developed a new THz near-field microscopy to achieve THz sub-wavelength imaging without approaching the sample with any devices. The group was led by Professors Xin-ke Wang and Yan Zhang from Beijing Key Laboratory of Metamaterials and Devices at Capital Normal University, China. 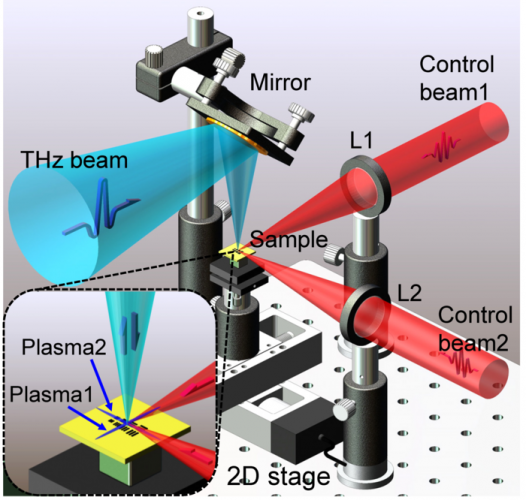 Schematic of THz near-field microscopy based on an air-plasma dynamic aperture. Two femtosecond laser pulses were focused in mutually perpendicular directions to generate two air-plasmas (Plasma1 and Plasma2) close to the sample surface. The incident THz beam was modulated by the cross-filament created by the air-plasmas and the reflected THz near-field signal was measured. The inset shows the relationships between the two air-plasmas, the THz beam and the sample [Credit: by Xin-ke Wang, Jia-sheng Ye, Wen-feng Sun, Peng Han, Lei Hou, and Yan Zhang].

The new technique was developed based on an air-plasma dynamic aperture. Unlike traditional methods where the sample surface must be approached by a THz detector or source, in the new THz near-field technique, a cross-filament was formed by two perpendicular air-plasmas overlapping above the sample. This overlap opened a dynamic aperture that could modulate the intensity of a THz beam on the sample surface and, when the cross- filament was close enough to the sample, enable THz imaging with sub-wavelength resolution of tens of microns (approximately half of the THz bean λ).

By removing the need for an air-plasma device such as an emitter to approach the sample, damage was avoided and the limitations on sample choice were effectively removed.

To check the performance of the technique, four different kinds of materials were measured and their THz sub-wavelength images successfully acquired. These four materials were a metallic resolution test chart, a semiconductor chip, a plastic pattern and a greasy spot.

The team also report that the technique is potentially suitable for analysing encapsulated samples, so long as the packaging is transparent to THz and visible light.

As a result, the researchers anticipate that the reported method will significantly broaden applications of THz near-field microscopy.