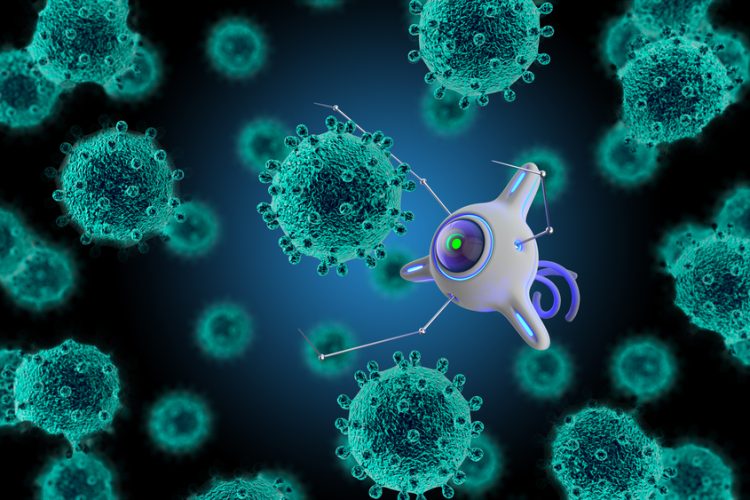 Professor Hongsoo Choi’s team at The Department of Robotics and Mechatronics Engineering at the Daegu Gyeongbuk Institute of Science & Technology (DGIST), Korea, developed revolutionary technology that produces over 100 microrobots per minute.

Microrobots created for minimal invasive targeted precision therapy (a method that minimises the surgical incision area) can be manufactured in several ways. Three-dimensional (3D) printing technology like two-photon polymerisation (2PP), triggers polymerisation by intersecting two lasers into synthetic resin. However, voxels (the pixels created by 3D printing) that form the structure, are designed with nanometre-level precision and must cured successively, making production of one microrobot a lengthy process. Another issue is that highly concentrated magnetic nanoparticles contained in the robot can block the light path during the procedure, affecting uniformity of the finished product.

To fulfil the need for more efficient techniques, the DGIST team found that by flowing a combination of magnetic nanoparticles and gelatine methacrylate into a microfluidic chip, the biodegradable formulation can be cured by light, over 10,000 times faster than existing methods, like 2PP, a type of 3D printing.

Next, the team cultured the microrobot with human nasal turbinated stem cells. This step ensured the stem cells adhere to microrobot’s surface. Magnetic nanoparticles inside the robot respond to a magnetic field, enabling it to be moved to the chosen target area by technicians, using an external electromagnetic field control system.

To test the microrobot’s navigating capability, a maze-shaped microchannel was built. It took six hours for the microrobot to disintegrate. Stem cells proliferated at the site and after 21 days, the stem cells were put into nerve cells to confirm normal differentiation.

The research team also tested whether the stem cells were affected during the journey. Hippocampal neurons taken from a rat embryo were fixed to the surface of the microrobot, then cultured on a micro-sized electrode chip. After 28 days, electrical signals were observed from the hippocampal neurons. It was found the stem cells effectively disconnected existing nerve cells at the chosen site, suggesting the experiment a success.

Professor Choi explained: “We expect that the technologies developed through this study, such as mass production of microrobots, precise operation by electromagnetic fields and stem cell delivery and differentiation, will dramatically increase the efficiency of targeted precision therapy in the future.”

The National Science Challenges Support & Network, National Research Foundation of Korea, and the Ministry of Science and ICT all aided the delivery of the research.

The study was published in the journal Small.